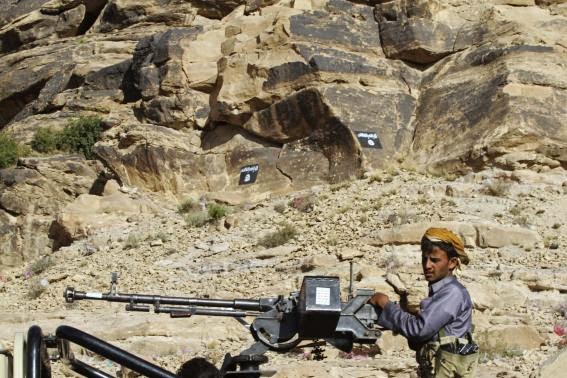 A senior Yemeni security official said Iran has steadily supported the Houthis, who have fought the central government since 2004 from their northern stronghold of Saadah.

“Before the entrance into Sanaa, Iran started sending weapons here and gave a lot of support with money via visits abroad,” said the Yemeni official. Iran saw victory would be swift in Yemen, unlike in Iraq and Syria, and “with not much expenses,” added the official. “(Reuters, 15 December)

A second Yemeni security official told Reuters that “weapons are still coming in by sea and there’s money coming in through transfer.”

A Western source also told Reuters that Houthis have been getting training and money from Iran.

“It has been happening over a year. We’ve seen Houthis going out to Iran and Lebanon for military training,” said the Western source.

“We think there is cash, some of which is channeled via Hezbollah and sacks of cash arriving at the airport. The numbers of those going for training are enough for us to worry about.”

And a senior Iranian official told Reuters that the Quds Force had a “few hundred” military personnel in Yemen who train Houthi fighters, He said about 100 Houthis had traveled to Iran this year for training at an IRGC base near Qom.

The Iranian official added that there were Iranian military advisors stationed in Yemen, and the pace of money and arms getting to the Houthis had increased since their seizure of Sanaa.

“Everything is about the balance of power in the region,” said the Iranian official. “ Iran wants a powerful Shia presence in the region, that is why it has got involved in Yemen as well.” (Reuters, 15 December)

Iran regards Saudi Arabia as its main rival in the region, and with Houthis in power in Sanaa it sees a shift in balance of power in Yemen against the kingdom and in its favor.

There were also silencers, 2.66 tons of RDX explosives, C-4 explosives, ammunition, bullets and electrical transistors on board the cargo ship.

A few days after Sanaa takeover, Houthi gunmen surrounded the National Security headquarters and freed from jail eight Yemeni crewmembers of “Jihan 1.” Two members of Hezbollah jailed for providing military training to the Houthis were also freed from the jail.

With the Houthis now in control of the capital, the airport and most of the port of Hodeidah, more overt Iranian support for the Houthis is expected.

woooooow what about majid zindani and the gang

These are usual standard charges against Iran by the Wahabbis, the reality is that the Zaidi Shias or Ansarollah have suffered tremendous discrimination in Yemen historically, but now they are greater in numbers, organization and military strength. It was not Iran that sent 60,000 troops to suppress them in 1960's and used mustard gas, but Egypt and Saudi Arabia. Now the regional dynamics have changed and the Zaidis are in the ascendancy with or without "Iranian support". They are some of the best and toughest fighters in the Arab world, at par with the legendary Hezbollah.

Iran deliberate exports violence and blood in support of subverting the sovereignty of the Arab nations of the Middle East.

Yes Iran started the Arab-Israeli conflict and the occupation of Palestine! Right?

What sovereignty?,most of the arab states are nothing but vassals/puppets of the west who only have themselves to blame for their own weakness and corruption,iran doesnt need to subvert anything

Arab countries are sovereign nations. That's why you oppose Western interventions. But one needs to have same standards regarding all conflicts, including Iran's role in those countries.

no, Iran didn't start it...but the Khomeinist dictatorship spends a great deal of money and effort to insure that the occupation doesn't end and that there is deal reached to end the conflict