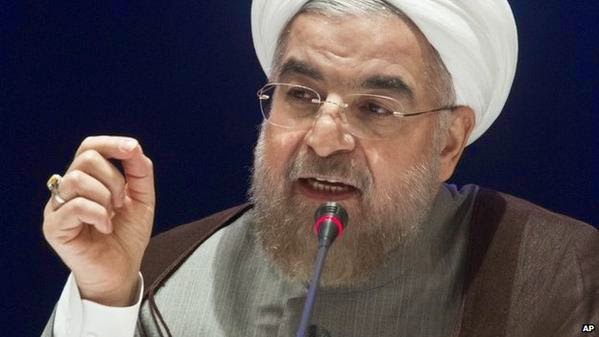 Iranian President Hassan Rouhani has spoken out against corruption in Iran and warned that it is endangering the Islamic Revolution.

In a televised speech, Rouhani said bribes once “given under the table is now being given on the table.” He called on Iranians to “apply all our power in fighting corruption.”

“The continuation, the deepening and the expansion of corruption is endangering… the Islamic Revolution,” Rouhani said. (IIRB/BBC, 8 December)

In a not-too-veiled criticism of the IRGC, Rouhani said monopolies that control rifle production to advertising were the cause of corruption. IRGC has become a major monopolistic power, controlling a third of the country’s economy, and is widely believed to engage in illicit and black-market activities.

UPDATE: A more pointed attack on IRGC from no less than the president of the Islamic Republic:


“With the accumulation of power in one institution, corruption is created…If guns, money, newspapers, websites and propaganda is concentrated in one place there will certainly be corruption. So the world has become wise to separate these powers…” Rouhani said.

he's right...and nothing will change.... Khomeini and then Khamenei have ceded so much to the IRGC that it's going to take regime change to undo it.

Unfortunately under these corrupt Akhoond, Iran ranks lower than Pakistan and India on the Transparency International global index of corruption. No nation ever let $18 billion worth of gold bullion just disappear into Turkey and governor of the bank Markazi end up in Canada with $3.5 billion and then there are literally millions of similar cases, not to mention rampant bribery.

Agreed. Nothing will change including the lifting of sanctions. Cause there are those in Iran that have carved up a very comfortable living from corruption and illegal imports. you walk into any high street in Iran and you will virtually notice dozens of banks and financial fronts sprung out, out of nowhere! This is in a country that people often have to work two different jobs to make end meet. In a country that makes and is a pioneer of carpets, you will notice the shopping malls are flooded with Turkish and Chinese junk carpets! so they not only have means to import cheap rubbish but have created shopping malls to flood that junk as well. They are all front for illicit activities. Case in point that guy who is prison accused of embezzling billions of oil money under Ahmadinejad. Is he still in prison or has moved out. It is depressing the amount of corruption and kolagh-bardari in that culture. BTW, this is nothing new. During the Shah's time, corruption was rife as well. It is part of the culture that breeds this behavior!

Yes all true, but how do we change the rotting culture when all the educated Iranians are overseas and anyone with a sense of the future or aspirations to improve wants to immigrate? Disgruntled young Iranians are willing to die in vain in Australian and other detention centers than live in Iran. It is a very depressing story to see what has happened to Iran. The 1979 "revolution" has gone astray worse that the Bolshevik 1917 Russian one, and hope Iranians don't have wait for 75 years before the Akhoonds are turfed out?

Well this is a fundamental question that is never discussed openly as far as I know among Iranians. How do you change a culture built on deceit and pretension?

In short like many things it will take time but can be achieved. It is akin to change that happened in Victorian England whereby the virtues like honesty, accountability, and respect were placed above self-interest. In Iran there is no notion of tolerance and respect to others opinions. If there is one it is normally made up of superficial Taarofat and common (avam) culture. Islam has not helped either. It has added sheer intolerance, deceit in the name of avoidance, and treating anyone who is different from one be it female, other religious minorities or anyone different as second class to an already malaise culture. We Iranians have a self centred view of ourselves as if history has cheated us and we should have been treated much better. We are supposed to be the cradle of civilisation but if you walk into any street in Iran, you will see people emptying their rubbish into water flows (jouy/ganat) next to where they have shops and houses. This is nothing new. One of the ways the sociologist have identified as indicative of law abiding is the way people drive. When people drive, they are expected to follow rules and regulations and give way to others where expected. You project that to Iranian roads and you can see for yourself, the dismal failure. I think the common terminology for it is Khar-to-khar!

I still believe that Khatami tried to address some of these points. The notion of Civil Society and respect for the Law. Also we have to remember that great majority of Iranians are lower classes and as much as we dislike to draw the line, these classes have no faith in the law (to some extend justifiably) because they believe the law is there to protect the wealthy classes. Most of the nouveau rich in Iran these days are from these classes as well. They are the ones that have amassed fortunes. Twenty years ago they did not have a car in their family and now they are driving some of the most expensive cars in the World. The middle class and educated classes by and large have left Iran. The towns are full of newcomers who speak with village (atraf) dialects. Thus there has been a great shift in demography as well. With that they have brought their own culture as well. Those people tend to be far more gullible and easier to fall into the ideology that is being preached by the regime. They support the regime becayse they get preferential deals and hands out and they are the one coached everywhere to support the regime.

I have thus come to conclusion that short of regime change and “let us start from square one”, nothing is going to change I am afraid.

"No nation ever let $18 billion worth of gold bullion just disappear"
-Really?

1) Germany is missing 80 billion worth of GOLD bullion that they gave to the US to hold on to during the cold war. When they asked for it back, the US said it cant give it back right now. The Germans asked to come to the US to see it for themselves. The federal reserve refused
http://chasvoice.blogspot.com/2012/11/tracking-down-germanys-missing-gold.html

The first step with any problem is to admit there is a problem in the first place.
The second step is to public discussions on the extent and call for solutions.
Prior to the revolution foreign corporations from the US and all over the world would complain you had to bribe the Shah's men with "commisions" otherwise no contracts would be granted. for examle Bell Helicopters for example said in 1975 they had to bribe the Shah's brother in law $3 million.
http://tvnews.vanderbilt.edu/program.pl?ID=256623
http://cleanupcityofstaugustine.blogspot.com/2007/08/securities-and-exchange-commission.html

When Mike Wallace confronted the Shah about corruption in Iran, the Shah got defensive and angry and accused them of saying it out of Jealousy, of what we'd have to guess.
https://www.youtube.com/watch?v=N95jAvKliJU

At least this regime aknowledges corruption that it exists, and is a problem, and that something needs to be done to about it. There is public discourse in Iran for the first time aboutcorruption, one banker was executed, Babak zanjani was arrested for his role in corruption.

Iran's attorney general has said all three branches of Gov have corruption.
http://www.payvand.com/news/14/may/1152.html