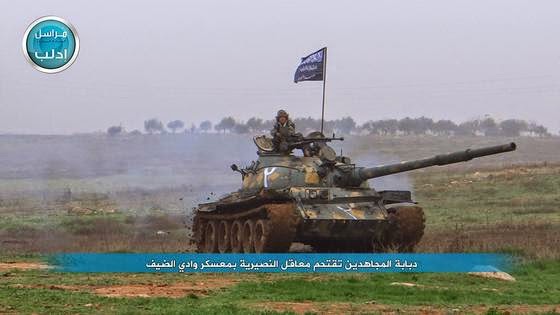 Two important military bases in Idlib province fell on Monday to insurgents led by Al-Nusra Front, the Islamist militants aligned with Al-Qaeda. In a strategic loss for Syria’s military, its soldiers abandoned the bases, Wadi al-Daif and Hamadiyeh, after intense fighting that began Sunday morning. The two bases sit on a major highway - M5 - linking cities of Aleppo, Idlib and Damascus. (The New York Times, 15 December)

UPDATE: The Syrian Observatory for Human Rights said nearly 200 combatants on both sides were killed in 24 hours during the battles for military bases. SOHR also reported that the Al-Nusra Front has captured at least 120 regime soldiers.

Photo credit: Al-Nusra Front tank being used in the battle at Wali al-Daif in Idbil province (Al-Nusra/longwarjournal)
Posted by Nader Uskowi at 9:00 PM

major victory for islamic state cut vital highway linking damascus and aleppo. assads forces can neither get supplies nor reinforcements. next advance is the big city of idlib. its looking bad for the family dictatorship. as video link shows, iranian afghan mercenaries were thrown in as counter attack, were defeated with heavy losses.

It almost seems like you're enjoying an Al-Qeda victory as some sort of freedom league fighting the Assads and paving the way for a democracy. Next thing you know you're gonna hail the establishment of another Caliphate in Idlib on another future page of this blog. Congratulations. Yes, definitely looking bad for the family dictatorship as you say, but also looking good for head-chopping, sex-slaver Islamist animals, which you seem to willingly forget. Which will be best for the Syrian people ? you seem to have picked your side already. After all, western MSM and Hollywood depicted the Afghan Taliban as freedom fighters too ( (for instance via blockbuster Rambo II and some episodes of the MacGyver TV Series, with Afghan women fighting the Soviets AK-47 in hand with beautiful and sexy, long dark hair in the air as if it ever existed as a Mujaheddin profile during that war) I shouldn't be surprised by an anonymous qualifying their Syrian branch as such here. Only time goes by in an flash, people don't change as fast. Tell me, did you cry and prey for the souls of poor brave ISIS fighters a few days back when they got repelled with maximum prejudice by Assad's forces while trying to storm the Deir el-Zour air base ?

one can rejoice in the setbacks to the Assad dictatorship without harboring the slightest tolerance to islamist swine of ISIS.

a rational and decent person would like to see the demise of the fighters for ISIS as well as the Lebanese/Syrian/ Iranian fighters. both sides are fighting to impose a vile regime on Syrians.

if all the fighters were gathered together and vaporized, Syria and the Middle East would be better off.

AnonymousDecember 17, 2014 at 8:14 PM
So you`re quite happy just to see the carnage continue without an end in sight then?.If you cant honestly tell the difference between the modern secular nationalist government of assad,no matter how repressive it may be,and the sunni wahabists,who by the way want to murder,expel or enslave anyone who isnt a sunni while at the same time creating a literally medieval caliphate,then frankly you must be totally blind.The choice is not and never has been between assad and some western style democracy,the choice is between assad and the wahabist caliphate and frankly unless you`re a dyed in the wool islamist nut job that choice should be a no brainer,unless of course you`re one of those psychopaths who just enjoys watching a country burn

I am not at all happy for the killing to take a protracted length of time and would greatly prefer to see them all dead within a week....so that the decent people of Syria can live decent lives without being preyed upon by the foul parasites on both sides.