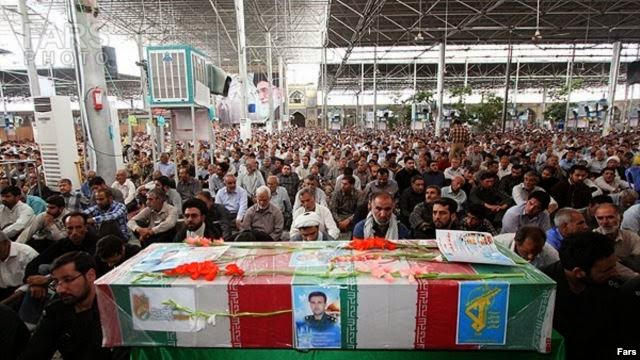 Iran did not provide any details on Col. Alamdari's death, and it was not immediately known if he was killed while flying a combat aircraft, like one of Su-25 close air support aircraft that Iran transferred to Iraq recently, or whether he was killed in action on the ground. He could have been involved in advisory and training role with the Iraqi air force or operating Iranian UAVs over Iraq.

Perhaps a silly question, but would he like have been a pilot of the regular Iranian air force or IRGC's air force?

He was identified as an IRGC-AF pilot.

So, ISIS has anti-aircraft missiles!

So presuming he is an IRGC-Colonel and piloting one of the recently arrived Su-25's, what information is there regarding what system brought down the pilot and machine.Presuming 'killed in action"means whilst being in contact with his enemy. That is ISIS, ISIL, Islamic Caliphate. Gee I wish these twits would settle on a name. There seems plenty of chatter about post Gaddafy Libyan MANPADS proliferation. Does lend me to question what ever happenend to the FSA. What ever happend to their 2011 requests for anti aircraft equipment. So as a helicopter might not be able to loiter over a populated area and roll out a barrel of bomb. So what do you guys know re Libyan and other sourced missiles and abilities that have seemingly fallen into the wrong hands? And most importantly, through who's hands and funding does it come through?

As mentioned earlier these planes are Su-25s and Iran was the source of them. Having said that, Russia fully backed the plan and it will also immediately supply Iran for the planes given to Iraq. Huge Russian arms sales to Iran is awaiting in the near future when the result of the 5+1 is finished. This will include jet fighters, submarines, helicopters, air defence etc. The Russian military output is increasing its production capability and as such it can once again from 2015 supply its foreign partners with the necessary arms.

Regarding Iranian regular air force involvement in Iraq, the IRIAF is since day 1 doing reconnessaince flights alongside the Iran-Iraq borders, especially the F-4E jets are very much active. Iran is ensuring no movements is taking place towards its border with Iraq. The Iranian Army Aviation has moved forward its attack helicopters in sensitive areas which might be utilized by the ISIS for surprise attacks against Iran. Currently the situation is in control but Iran wants to deliver a blow to ISIS once and for all in order to ensure it strength is decreased significantly.

Situation under control? Situation is getting worse by the day. I hope the Iranian military leaders do not follow your rosy assessment.

Paul, in the photo from the colonel's funeral ceremony that was just released, above, please see IRGC logo alongside his photo wearing a colonel's uniform decorating his coffin.

Mullahs want martyrdom for Iranian people and martyrdom they will receive.But it will all boomerang back at the regime in the end. The beginning of the end comes to mind.

Cheers Nader, it's clear now. I was wondering earlier when it wasn't so clear and before the photo was updated. Thanks as always.

Unclear what type of pilot. Possibly a Mil pilot KIA on ground. Possibly reslated to air assault or establishment of CAS. Speculation at this point.

Nader: When saying situation is under control it means any escalation can be predicted and mitigated, it doesn't mean the war is stopped or finished. In military terms there is nothing ISIS can do to surprise Iran or its allies anymore, it has entered a phase when the easy gains are over and it is facing tough resistance on all fronts. This in turn means the intelligence work on the Iranian side is start giving result and it no longer relies on "false" or "semi false" information given to it from "supposed to be allies" or "supposed to be reliable sources". Currently Iran is focusing on the Iraqi Kurds willingness to fight ISIS and also once again secure Iran-Iraq-Syria corridor. The IRGC has openly told the Iraqi Kurds that if they don't openly fight ISIS there will be no easy life for them in northern Iraq in the near furture for them when it comes to the Iranian stance with regards to Iraqi Kurdistan. This is a warning which the Kurds very well understand the content of.
So the assessment is not a "rosy" one but rather a realistic one.

I disagree. There are still surprises in store. IRGC/QF intelligence missed the capture of Mosul altogether.

On Kurdistan, threats by IRGC, as you are suggesting, will not work. If the people of Kurdistan would be willing to declare their independence, which is not yet announced, no foreign Shia militias or military intervention could so easily stop the process.

The main characteristic of both your comments here is bravado and sloganeering. During the tense situation on the ground, you need to work on sober and realistic analysis. Again, I am sure the Iranian military does not operate on such slogans and clinching fists in the air mantra. Cooler heads must prevail to avoid being entrapped.

Nader: This is not sloganeering or baravado. What I refer to is the situation after the capture of Mosul, what you refer to is the situation when the capturing happened. As I mentioned that was a surprise...but once the intelligence assessment is done which is the situation now, the surprise phase is over. I think you try to "bubble" this ISIS situation more than it is right now, it was a thread, it is a threat but it is a threat which Iran is aware of and it is putting fierce force to contain.
With regards to Mosul, I can tell you the capture of Mosul was the least surprise to Iran as Kurds for long time ago (at least a year ago) left Mosul because it was not worth all the efforts to uphold it. You can ask that question to any Iraqi Kurdish guy and he will tell you the same story. The Iraqi Kurdistan government decided to leave the Mosul area due to all problems and concentrate its efforts on other areas.
Iranian military crafts its strategies not on my analysis but on analysis of far more capable resources so you should not be worried about that ;-)
Most importantly they don't make "slogans" but show their true military capabilities on the ground and in the air and believe me this is what scares the enemies of Iran because they know Iran's armed forces don't joke and that is what has secured Iran from external threats, nothing else.

Nader: I think you are wrong that IRGC was caught on surprise. I think they exactly knew what is happening and I think they have a good plan eliminating ISIL threat,, Baath party influence in military and opposition in Iraq altogether. Intelligence is one area Iran doesn't boast at all. American's when fighting Taliban were surprised on the detail they were receiving and tactical suggestions the Iranian intelligence were giving them. Same is happening in Iraq.

So did Iran tell Maliki and Iraqi military official about the ISIL plans? Did the Iranians tell Iraqi government that ISIL was planning to capture Mosul on 10 June? Did Iran also knew in advance about the collapse of Iraqi Army divisions? (BTW, now that you are at it, let me ask if Iran actually facilitated the collapse?)

Wow, sounds like a plot directly from Uncles Napoleon!

Lots of fuss on those 'discussions', but nobody analyzed that kind of info that he was killed by a shrapnel on the ground, when he assisted in an operation of pilotless drones............