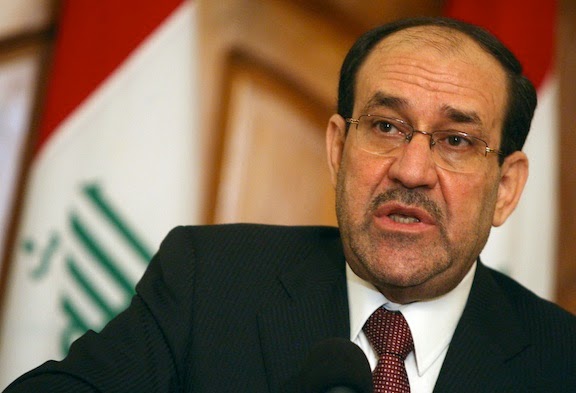 
Sunnis and Kurds walked out of the first session of Iraq's new parliament on Tuesday after Shi'ites failed to name a prime minister to replace Nuri al-Maliki, dimming any prospect of an early national unity government to save Iraq from collapse.

The United States, United Nations, Iran and Iraq's own Shi'ite clergy have pushed hard for politicians to come up with an inclusive government to hold the fragmenting country together as Sunni insurgents bear down on Baghdad.

Parliament is not likely to meet again for at least a week, leaving Iraq in political limbo and Maliki clinging to power as a caretaker, rejected by Sunnis and Kurds.

The Shi'ite bloc known as the National Alliance, in which Maliki's State of Law coalition is the biggest group, has met repeatedly in recent days to bargain over the premiership but has so far been unable either to endorse Maliki for a third term or to name an alternative.

Osama al-Nujaifi, a leading Sunni politician, former speaker and strong foe of Maliki, warned that "without a political solution, the sound of weapons will be loud, and the country will enter a black tunnel".

Lawmakers stood at the arrival of Maliki, who waved to his long-time foe Nujaifi and shook hands with Saleh al-Mutlaq, another leading Sunni politician.

But anger among the three main ethnic and sectarian groups soon flared when a Kurdish lawmaker accused the government of withholding salaries for the Kurds' autonomous region. Kadhim al-Sayadi, a lawmaker in Maliki's list, shouted back that Kurds were taking down Iraqi flags.

"The Iraqi flag is an honor above your head. Why do you take it down?" he shouted. "The day will come when we will crush your heads."

COMMENTARY: Maliki appears to be playing the long game, possibly in the hope that successful, localized counterattacks and CAS missions using newly acquired combat planes from Russia will provide sufficient political capital to at the minimum, maintain the political impasse among the Shia bloc, allowing him to retain power.

Situations in some ways similar to this often see the military stepping in to seize power. But in the recent past, Maliki has taken steps to weaken his military leadership and by so doing, reduce this threat to his power. However these steps have, at the same time, given rise to conditions that have resulted in military failures so plainly evident during the 2014 Northern Iraq Offensive.
Posted by Mark Pyruz at 7:03 PM

If he played sectarian game then, maybe Alawi, a former agent of famous agency, will do the proper job.

The enemies of the Islamic Republic dream for that kind of changes, where the Sunnis can veto most Shiite decisions.

I just want to inform u about some details:
1. Its all about the money ( oil )
2. Its all about divide and rule
Iraq is already divided. Iran and maliki know this already. The south and the west belongs to the shia and the north and the east to sunnis and kurds. Isis will be the new alqaida. Iran is the winner. Why? Iraqs most oil is in the south and west. 2mio. Barell per day. North and east have round about 0.5 mio. Barell per day and sunni militia and kurd and also isis want that oil. So they will fight each other. Why they will not attack the rest of shia iraq? Because the army will remain in the capital baghdad and will be loyal to maliki. The commanders who helped for the fast ongoing of isis were kurds. They just run away and also informed all soldiers to do so. U can google this. And there will be much more shia militias that will boost the army. At the end u will see the sunnis asking central goverment to retake the autonomic area they finally got. Why? Because they will have no income. Check this post in 6 months again ;-)
Please be friendly when u will reply. Thanks

This is about saving the Iraqi people from bloodshed, restoring peace and prosperity to the people of Iraq.

It's not about the Islamic Republic of Iran?!

Iraq need a new government that is inclusive, which looks after all of Iraq's different ethnicities and tribes. Not one who does nothing else but secure the interests of other countries whilst disaffecting large portions of the population. Any country that has as its top priority to further the cause of another country is doomed to become a failed state. Hence any future government in Iraq must work towards establishing sovereignty/independence and reject meddling from outside actors, this is indeed the only logical solution.

AnonymousJuly 2, 2014 at 3:03 PM
Agreed,the sunnis will be the big losers in any break up of iraq,personally I`d let the sunnis have an al qaida/isis ruled caliphate with no oil,landlocked and surrounded by hostile countries propped up by saudi handouts,in six months they`d be screaming for the old iraq back.Sadly the sunnis are completely unwilling to accept that they are no longer the rulers of iraq

and I guess you want southern Iraq appended to Saudi Arabia