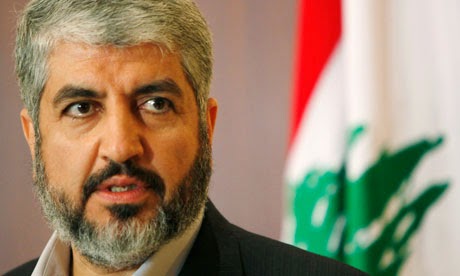 “It is no secret that the relationship between (Hamas and Hezbollah) officials has not been great because of the crisis in Syria. But Iran contacting Meshaal through (Speaker of Majlis) Ali Larijani, Foreign Minister Javad Zarif and a senior IRGC officer on 7 July encouraged Nasrallah to call Meshaal despite the Syrian boycott of Hamas. Therefore, Nasrallah contacting Meshaal has not had positive echoes in Damascus,” a Palestinian official in Lebanon told Al-Monitor. (Al-Monitor, 26 July)

On 16 July, Syrian President Bashar al-Assad during a speech on Gaza accused Hamas leadership of being “amateurs, wearing the mask of resistance according to their interests in order to improve their image.” (Al-Monitor, 26 July)

Renewal of relationships between Iran/Hezbollah and Hamas could be a move to show that the “axis of resistance” between Tehran, Damascus and Hezbollah should also include Hamas. Assad would be obviously upset with the development, as Hamas has called for his removal as a necessary step to bring peace and normalcy back to Syria. The events in the region are moving so rapidly that old alliances might come under questions and new alliances, albeit temporary ones take their place; another manifestation that the region is facing its most serious crisis ever.

Why do the Iranians care about the Palestinians again?

I thought Professor Cole offered a brief but useful insight into "the struggle between nationalism and political Islam" in the Arab world today:

Don't forget, too, that Cairo and Damascus are now on the same side against the Jihadist threat, providing even greater complication to this part of the world.

What Professor Cole refers to as the struggle between “nationalism and political Islam” is the political manifestation of an ideological struggle within the Islamic world, arguing some fundamental questions: Who is a true Muslim in the 21st century? How an Islamic society should behave in modern times? How should an Islamic society be governed? And the struggle is not just a Shia-Sunni, but Sunni-Sunni and Shia-Shia.

The fundamentalists, in both Sunni and Shia lands, look to find answers in those questions by creating a society like what they understand Islamic societies were in the early days of Islam. On Sunni side, we had the Taliban experience in Afghanistan, and now ISIL. On the Shia side, we have a powerful faction within the Islamic Republic of Iran who wants to take the “republic” out of the equation and create their own version of Islamic State.

On the political side, Cole correctly refers to the struggle between Muslim Brotherhood, and its variety manifestations in Turkey, Egypt, Qatar, Morocco, Gaza, etc. and the fundamentalist Salafists, in Taliban and ISIL form, but also in the ruling classes in the Gulf.

In its Shia version, we have types of Ayatollah Mesbah Yazdi in Iran, with powerful following in the Judiciary and IRGC, who believe the Vali Faqih should have absolute powers to rule as the representative of God on Earth, without any regards to electoral process or other trappings of democracy; ideologically very close to the Taliban and ISIL. And we have moderates and reformists, ideologically very close to Muslim Brotherhood.

And of course you have non-religious dictatorships in places like Egypt and Syria who want to make sense of what’s happening around them, and having tough time to do so. And then add the Arab-Israeli conflict to the mix. Hence, the shifting sands when it comes to old alliances in the region.

We are witnessing the beginnings of a region-wide conflict that could explode in an all-out religious war between fundamentalists and moderates in both Sunni and Shia lands.