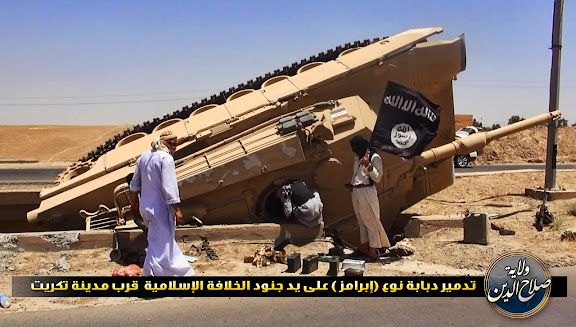 IS fighter is seen entering the largely intact AFV through the loader's hatch, looting the tank's secondary armament ammunition as well as what appears to be a related M240 machine gun. A jerrycan and pair of IA-issue boots can also be discerned among the items looted.

Rather than remain operators of heavy weapons in an organized retreat or destroy their heavy weapons before fleeing, IA crews appear to have simply chosen abandonment before changing into civvies, in the hopes of blending in with the civil population (much as they did during the invasion phase of OIF in 2003).
Posted by Mark Pyruz at 5:13 AM

As Iran has always stated, best arms in the hands of untrained and not dedicated staff is not worth the money spent. And that has materialized in this Iraqi situation. Unfortunately for all Arab armies, they rely too much on "slogans" and "empty glorification" without any true content. Look at Iraq now, look at Iraq for 30 years ago during war with Iran, look at Syria now, look at Syria during wars with Israel.....the list can go on for long, they are just not putting enough time and money in training the manpower and making them utilizing the tool to its maximum. It has nothing to do with their regimes or source of weapons, they just don't understand how you can make an army perform at its peak with regards to its equipment.

The Iraqi army stationed in northern Iraq has brought shame on all Arabs. It is clear that foreign actors have had a hand in the disintegration, specifically through bribery, playing with the sentiments of key figures within those army divisions which in turn have trickled down through the ranks to the common soldier. Otherwise there is absolutely no reason for them to flee/disband before a poorly armed militia. The tanks alone, with infantry covering flanks, could have been deployed spaced defensive lines, establishing fields of fire, thus creating a killing zone for any incoming milita unit. The tanks could safely have remained in defensive positions for as long as need be, without having to fear attacks from the air.

@Anon 1:04, That is true, an Iraqi soldier who ran away from fighting ISIL in Musol said: "When American's where fighting the commander was fighting with the troops and in front of them guiding them but the Iraqi officer ran away so what do you expect" I think the mentality and military tradition has a lot of influence. There is a pride in being Marine or Seal ... Same is in IRGC they have pride on what they are doing.

I disagree, what has happened is a result of sectarian sentiments/tribal thinking replacing strict discipline and duty towards the idea of nation building and the maintenance of the nation state. The recent disintegration of the Iraqi Army units is not due to lack of training or ability to operate various weapon systems. Iraqi troops fought very hard and did very well on its own territory from 1982 and onwards, inflicting substantial casualties on the attackers. The current dynamics are much different compared to the days of the Iran-Iraq war.

Heck, there is pride in being in the regular old U.S Army...When I was in, no officer or NCO would EVER ask a soldier to do something they were not willing to do themselves by example. That was the leadership philosophy that was instilled in training from day one.

Those M1A1's alone can nail targets out to 4,000 meters, while on the move over rough terrain in total darkness. No need to use them as fixed "bunkers" like the Iraqi Army did with their armor in 1991...The best defense is a good offense. Those tanks should have been sent on the attack, at night, backed up with plenty of mechanized infantry surrounding them...That is what they were built for. Fluid, mobile warfare.

I don't understand these cowards.That single tank could have destroyed all the ISIS pickup trucks without a single scratch on it. Yet those cowards used a M1 tank to run away with. Those Iraqi "soldiers" are a disgrace.

This is not the answer to my post, please read it again. My post was about the manpower training in Arab armies in general no matter which regime or what timeframe. Afghanistan was no nation either but they kicked the ass of the British and the Soviets.This is not the case in Libya, Syria, Iraq, Kuwait etc.

The M1 is indeed high tech, however, superior capabilities and overwhelming firepower of a certain piece of military hardware doesn't neccessarily dictate that the hardware must absolutely be used offensively in every case. Also, you have to take into consideration the amount of ability/skill (or how much of it they lack) of the tank crews. This doesn't have anything to do with the know-how of operating the basic functions of the military hardware itself. Are the tank crews and logistical planners able to engage in and commit themselves to complex maneuvers over long distances or not? (such an exercise demands alot more from both the tank operators and logistical capacity).

One must recognize that the reason why the American part of the Allied coalition plan called for fluid/mobile warfare (penetrating into Iraq a fair distance away from prepared Iraqi defensive lines opposite the Saudi border, rotating to the East, and attacking into the flank of the rear guard in North-Western Kuwait), was because they were very good at it, and it was the option that, they themselves correctly surmised, would yield the most favorable results for the Western forces of the Allied coalition.

Armored forces of the US, France and the UK have ever since the end of WW2 been extremly adept at performing pure armored spearheads. They learned from the Germans, who were the original masters of armored warfare during the span of WW2. Famous commander Erwin Rommel invented the much touted blitzkrieg tactic.

Iraqis and Iranians never adapted such lessons, partly due to the fact that it was not thaught to them by those who were responsible for advicing them (however in Iraq's case it was virtually an impossibility because the Soviets were never good at it anyways, who after WW2 continued the tradition of quantity coupled with simple offensive tactics over all other methods).

Even worse for Iran, (who was supplied and trained in the basic use of armor by the US), was the reversal of everything their armored forces had learnt during the Shah era, instead going back in the evolution of warfare to use WW1 tactics.

And the Iraqis that now are in charge of the tanks are still not able to pull off anything close to what the Western forces did in 91 (again, not being thaught proper offensive tactics, even though this time it is under US watch, probably for political and geo-strategical reasons).

Now for the ongoing situation; successful tank offensives rely heavily on first attaining good intelligence on the ground, knowing the exact whereabouts of enemy forces. Without that picture, any offensive using mostly armor run the risk of being defeated in well prepared ambushes in minor built-up areas like villages and small towns (which are under occuption of ISIS forces).

What i was pointing at in my previous comment was that the Iraqi army divisions and engineer corp who were stationed in the north, should (before the ISIS seized the initiative) have constructed fortified - and layered defensive lines near the Syrian border. The high command of the Iraqi military as well as that of Iran totally neglected the all too apparent hazard that is ISIS. How they failed to predict that ISIS would thrust into Iraq is beyond me.