ISIL Does Not ‘Dare to Approach Iranian Borders’ - IRGC 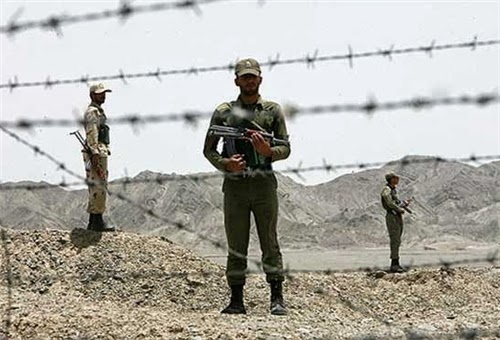 Deputy Commander of IRGC Ground Forces Brig. Gen. Javad Azimifar said in Tehran today that ISIL and its allied insurgent groups “do not dare to come close to the (Iranian) borders.”

“Groups like the ISIL don’t dare to approach the Iranian borders; they are not present in areas even thousands of kilometers away from the country's borders because Iran's borders are the most insecure place for their presence and moves,” Gen. Azimifar said. (Fars News Agency/ 26 July)

Azimifar added that Iranian Armed Forces are ready to give a crushing response to the ISIL-led insurgents if they “dare to even think of making an aggression against the borders.
Meanwhile, Iran’s Defense Minister General Hossein Dehqan told Iranian news agency ISNA that ISIL poses “no threat to Iran.”

“The members of the terrorist organizations are mercenaries, and want to instill fear in the region,” Dehqan said. (ISNA, 26 July)

It was not clear why Gen. Azimifar made the threat against the Islamic State at this time; if they have detected IS movements toward the Iranian borders. Also it's interesting that the Iranian defense minister calls ISIL “mercenaries.” Interesting in the sense that IRGC’s Quds Force has setup, funded and operates several Shia militias of different nationalities fighting in Iraq and Syria, or mercenaries. Perhaps Dehqan believes there are differences between Sunni mercenaries and Shia mercenaries.


The Islamic State is operating in Northern and Northwestern Iraq near the country's borders with Turkey and Syria, and a few hundred miles to the Iranian borders.

this is the sort of stupidity from Iranian officials that is all too common.

ISIL isn't shy and Iran can feel them coming ever closer.

Iran's government and IRGC will either retreat from their constant attempts to subvert the Arab states or they will reap what they has sown.

Now that the "commander" has challenged ISIL they might just try their luck !

not soon. they'll continue to attack in Syria and Iraq, gather more and more weaponry from iranian allies that they overrun, attract more recruits........ and force the Iranians to come to them

Just like it was "secure" when those five Iranian border guards were seized by sunni militants.

While I'm certainly not supportive of Iranian contentions or counter-contentions of "mercenary" use in the region, I can offer a more detailed explanation for it.

The Iranians consider ISIL a kind of policy lever for regional and extra-regional powers bent on destabilizing nations in the Middle East, with the ultimate aim of draining Iran. Moreover, the Iranians view their support for Syria in terms of a nation-to-nation mutual defense pact, and-- perhaps in less formalized terms--Iraq is also seen in such terms.

We Americans were caught in similar sorts of apparent hypocrisy during the Vietnam War, where we accused the Warsaw Pact and PRC of employing mercenaries, particularly in reference to the NLF. Hollywood and John Wayne himself acted out on the big screen this claim in a scene of the movie "The Green Berets" where an instructor (not John Wayne) lectures a skeptical news reporter.

Rizvi/India,- ISIS surge only happen due to the consent of local sunni tribes and bribed Iraqi army officers, who fled at the time of need. At present scenario Iran credibility on stake,Iran is calibrating the situation that how far it can go without minimum damage in Iraq. ISIS backbone is falluja & Ramadi, Iraq should act with ferocity to crush ISIS without taking cognizance of civilian causalities, Sunni rebels always take leverage on this account. In my opinion the present situation will change, with in two months Tikrik and Mosul will fall to Iraqi authorities.

The QF, and its predecessor the IRGC's external ops department, started using mercenaries from the very beginning. As matter of fact, they organized and funded the Hezbollah in the 1980s, and use them for their external ops, as in the infamous attack on the marines in Beirut. From the beginning of the Syrian conflict, the QF continued that strategy by organizing, arming, funding and directing Shia militias, composed of Iraqis and other nationalities, in Syria. And it's doing same in Iraq. It is a long-held view among the Iranian leadership that creating and unleashing a Shia foreign legion, if you will, in the region would suite them better than engaging the enemies directly through the use of conventional military force.

Iraq might be the biggest test for QF's foreign legion/mercenaries strategy. ISIL is more and more taking the shape of an army, although still keeping its agile, asymmetric characteristics. Shia militias might not be a good match to defeat them, and this could force Iran into putting more boots on the ground, more than few hundred or thousand of advisors, trainers and operators.