Maliki said to be losing support from Iran & Al-Sistani 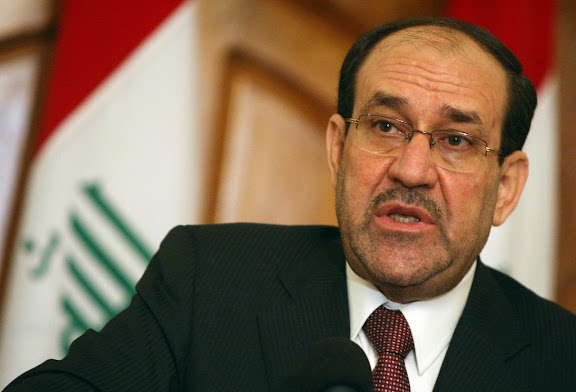 The shift, officials said, is prompting members of the premier's own alliance to reconsider their support and dimming the prospect of his stay in power.

In recent days, high-level delegations of Iranian military officials and diplomats held a flurry of meetings in Baghdad and the Shiite religious capital Najaf, where they were told that Mr. Maliki, a Shiite, has lost the confidence of all but his most loyal inner circle, Iraqi officials with knowledge of the meetings said.

One Iraqi official briefed on the meetings said Iranian representatives signaled during their visit that Tehran has "really started to lean away from Maliki as a candidate."

COMMENTARY: Difficult to ascertain the veracity of these Iraqi-Shia officials, or even their identities. However given Iraqi struggles on the battlefield as well as the security situation on the terrain they control,  political pressure against Maliki's is surely being levied against his bid for a third term.

Another interesting development is the large field of Iraqi presidential candidates put forward, including more than one PUK candidates, as reported by Reidar Visser at his Iraq and Gulf Analysis blog.
Posted by Mark Pyruz at 1:22 AM

Nobody Loves You When You're Down and Out.


let Iran start by abandoning Maliki. it'll be good practice for the coming abandonment of Bashir Assad and his family.

and then for the Khomeinist regime