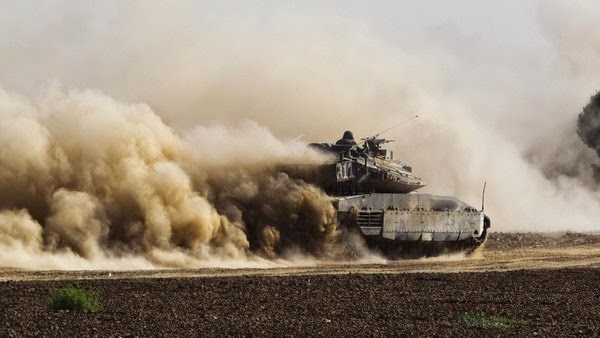 Israeli tanks rolled into northern Gaza on Thursday night and naval gunboats pounded targets in the south as Israel began a ground invasion of Gaza. Israel said its actions were taken after Hamas militants continued showering Israeli cities with rockets. Hamas said the rocket attacks were in retaliation of Israeli bombardment of Gaza, which has left more than 230 Gazans dead, including many women and children.

Israel said the incursion was a limited one focused on tunnels into Israeli territory, and was not intended to topple the Hamas government in Gaza.

As long as Hamas is in control of Gaza there will be no future for Gazans. Fuel to the flames comes to mind.

behold the world most invincible MILITARY MACHINE ,doing what it knows best-FIGHTING THE poorest people in the world !!!.

It's good that this horrific tragedy, besides the shooting down of the airliner, is brought up on this blog. It's sad that the latter event almost completly overshadows the former in main stream media. I don't lend much credence to conspiracy theories, but the downing of flight MH17 coincides with the launching of Israel's latest military campaign on 17th of Juli. And another civilian airliner (flight TWA800) went down on exactly the same date in the 90's. Who knows, it could just be a mere coincidence and the incidents might have no link(s) whatsoever. But it does make you wonder...

Quote: "As long as Hamas is in control of Gaza there will be no future for Gazans. Fuel to the flames comes to mind."

Seriously? That is true if you have a short memory. Surely you cannot claim any good future life when GAZA was under control of Israel for decades...

where were you when the Hindenburg went down?

considering that the rocket attacks began before any of those 230+ Gazans were killed by the Israelis returning fire, Hamas claims don't have any real truth,

" Surely you cannot claim any good future life when GAZA was under control of Israel for decades..."

and bad as things were


things in Gaza have gotten quite a bit worse since then with Hamas in charge. the UN is still using food provided by the US and Britain to feed 75% of Gaza's people.
Hamas has made things worse for the people in every way possible..... they're getting the people killed, their are no jobs except working for Hamas or in the tunnels. Hamas taxes the tunnels and doesn't pay the people working the government jobs...Hamas wants the PA to pay all the salaries that Hamas isn't paying.

heck, at least when Israel was still running things, Gazans could cross the border and find work in Israel and bring home some things to feed their kids.

that's all gone now and Hamas fires rockets into israel and keeps the Gazans penned up and scared for their lives.

Israel kills Palestinians both in the West Bank and the Gaza Strip on a weekly, sometimes daily basis, and this with or without rocket fire from Hamas or anyone else. Checkpoints in the west bank see their daily share of human rights abuses with mothers forced to give birth on site quite often resulting in both their child death and their own, and elders and critically ill blocked on their way to vital treatment in hospitals. Gazan fishermen often get shot a with high caliber naval weapons and often get their load confiscated (when they aren't sunk) would they venture too far from a catastrophically thin stretch of their sovereign maritime borders declared irrelevant by the IDF to this day. Palestinian children trying to recover scrap metal at IDF-controlled border fences regularly get killed by sniper fire. And this too, occurs all the time, with or without rocket fire. 2013-2104 have seen record levels of Palestinian homes razed while expelling and/or killing its occupants and extending illegal settlements in their place. Such actions are common practice and go on indifferently in peace and war time in defiance of every international resolution and regulation. You do seem to have a short memory indeed : rocket fire from Gaza this time started after the deadly military and police crackdown occurred in Palestinian territories based on unilateral, unconfirmed and unproven grounds linked to the assassination of Israeli settler teens that the far right government instantly pinned on Hamas without ever providing even scarce of debatable evidence or analysis whatsoever to back their claim. It is yet another attempt by the Netanhyahu government to provoke anybody it can to destroy more chances of a peace deal while wreaking Palestinian livelihood. The very same kind of abuse took place against Gaza, with the IDF violating a truce agreed months before the 2009 bombings by performing targeted operation against Hamas leaders , and yet of course by then, again, Israel falsely claimed that its campaign was in response of rocket fire from Gaza. Nauseating policies by an oppressive and colonialist government undertaken to justify its increasing ethnic cleansing of a people it cannot stand in its obsession for conquest and dominance.

AnonymousJuly 19, 2014 at 2:57 AM
Yes,if only the palestinians had just accepted their lot under a brutal and repressive occupation things would have been so much easier......for the zionists
If things are worse in gaza its because of the israeli blockade turning gaza into a giant open air concentration camp for all its citizens,and lets not forget to mention the current round of bombing either

Iran under the occupation by the islamists is a far larger "open air concentration camp" than Gaza would ever be.

AnonymousJuly 19, 2014 at 3:50 PM
Most iranians would disagree with you on this score,tho the west is trying to do to iran with sanctions what israels physical blockade has done in gaza,and if you honestly cant tell the obvious difference between shia irans islamic democracy and the mainly sunni islamist wahabist/salafist ideology then you really must be completely blind

No,I'm not "completely blind",thank god. But unlike you I have tasted the so-called "shia iran's islamic democracy" first hand and it stinks. There is no such thing as an "islamic democracy". Because the system that exists in Iran today doesn't tolerate any real criticism of the regime.Hell,even the regime's own so-called "opposition" in that country can't be tolerated let alone real opposition against the tyranical system. And please don't think for "Most iranians" because if it was so the regime wouldn't be spending its greatest budget on structures like IRGC and BASIJ to oppress the majority of Iranian citizenry with,would they?