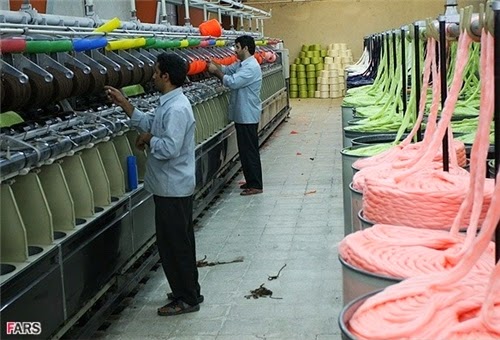 Iran’s Minister of Mines and Industries Mohammad Reza Nematzadeh reported to the cabinet today that 14,000 industrial units have been shut down in the country in recent years due to severe financial problems. Nematzadeh, calling the numbers “shocking,” said an allocation of 40,000 billion rials (around #1.3 billion) was needed to help some of the factories resume their activities. (Iran Daily/IRNA, 12 July)

It was not immediately clear if the government will be asking the parliament for the extra funding during a time that the government’s budget has been cut significantly across the board. Sanctions and a decrease in the value of the national currency are seen as the main reasons for the closure of industrial and production plants in recent years.

And replaced with imported chinese junk. Only the IRGC and the regime profits from those imports.

I for one would soon like to see Iranian manufactured goods on the shelves of my local supermarket, appliance store, car dealership...... We westerners are renowned for scoffing at the products and endeavors of other cultures. We scoffed at Japanese technology. We should have learned a lesson. Then we scoffed at the Russians, Koreans now Chinese and Indians....... Yet Great Wall and Mahandra vehicles sell better than the locally made models. Not just because they are cheaper. Iran's economy firing on all cylinders, not surviving on her oil and mineral wealth almost alone, would be a wonderful thing not just for Iranians but for the whole world. I hope the Rouhani government spends big on stimulating the economy. I hope there can be a deal done and sanctions lifted. P.S. "economy is for donkeys"? I didn't get it?