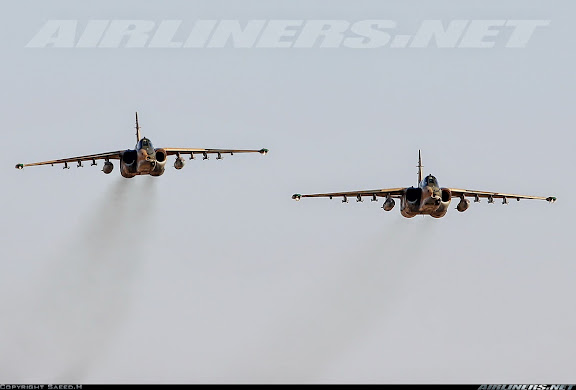 Above: file image of IRGC-AF Su-25 aircraft, now in Iraq for combat missions against "Islamic State"

According to The Hill:


Defense Secretary Chuck Hagel said Friday that Iran and Russia were helping Iraq battle a Sunni extremist insurgency but that the U.S. was not coordinating its own assistance with either country.

"We are aware of the Iranian and Russian efforts to help the Iraqis, but we are not involved in coordinating any missions," Hagel said.

Hagel’s comments came after reports quoted Iraqi military officials saying that Iran and Russia were conducting airstrikes in their country, hitting Islamic State in Iraq and Syria (ISIS) targets. A Pentagon official said the U.S. believes Iranian pilots are in the air in Iraq but not Russian pilots.

"We believe that there are some manned Iranian flights manned by Iranian pilots," the official said. "There's nothing that indicates there are Russian pilots flying around."

Commentary: This appears to serve as a form of cooroboration for open source rumors regarding less than operational condition of ex-RuAF Su-25 aircraft (as well as a lack of required technical resources) Russia recently airlifted to Imam Ali bin Abi Talib Air Base; while at least three operational IRGC-AF Su-25s have been successfully flown to al-Muthanna Air Base at Baghdad.

This further serves to validate this writer's impression that IRGC-AF air and ground crews are functioning in Iraq, in ways similar to American armed forces Farm Gate operations during early U.S. efforts in the Vietnam War.
Posted by Mark Pyruz at 1:28 AM

All technical equipment is operated by Iran.I doubt Iraq is capable of manning or operating such systems for now.