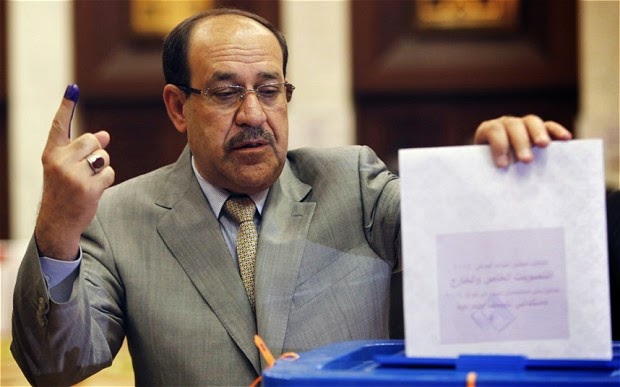 The Associates Press reported today that Iraq's Prime Minister Nouri al-Maliki has rejected an attempt by Iran’s Quds Force Commander Maj. Gen. Qasem Soleimani to persuade him to step down. Two senior Iraqi politicians, both belonging to Shia factions, told AP on Wednesday that Gen. Soleimani met Maliki recently in Baghdad and asked him not to seek a third term as premier. AP did not disclose the identity of the politicians.

Soleimani played a crucial role in Maliki’s re-election to his second term although his party did not finish first in the parliamentary elections then. Now that Maliki’s State of Law bloc has received the largest number of parliament seats in April election, he is determined to form the new government, defying his Iranian allies. Maliki's bloc won 92 of parliament's 328 seats in the election.

If what Iraqi politicians are saying is in fact confirmed, Maliki’s rejection of the Iranian pressure puts Tehran in a difficult position in the midst of an existential crisis in Iraq. The two politicians said Soleimani was “taken aback” by al-Maliki's refusal, but did not further elaborate.

Iraq is under pressure to form an inclusive government that can draw Sunni support away from the insurgency. But many Sunnis are deeply alienated by Maliki, accusing him of sidelining them. Many of his Shiite and Kurdish allies have also grown disillusioned, saying he monopolizes power. (AP, 23 July)

Maliki replies that it is the will of God that he rule for the rest of his life just like Khomeini and Khamenei.

AP is reporting using same unnamed sources previously cited in the WSJ article I posted on about 17 hours ago.

Today the Iraqi Parliament put off voting on a president.

Maliki must possess sufficient internal backing at this point to at least block selection of an alternate PM.

If these unnamed Iraqi sources are detailing an accurate political situation, the Iranian position further parallels that of the United States.

That picture could almost mean a finger against the Iraqi people.

US air force will start flying against the "Islamic State" when Maliki steps down and someone like Ayad Allawi takes the lead.