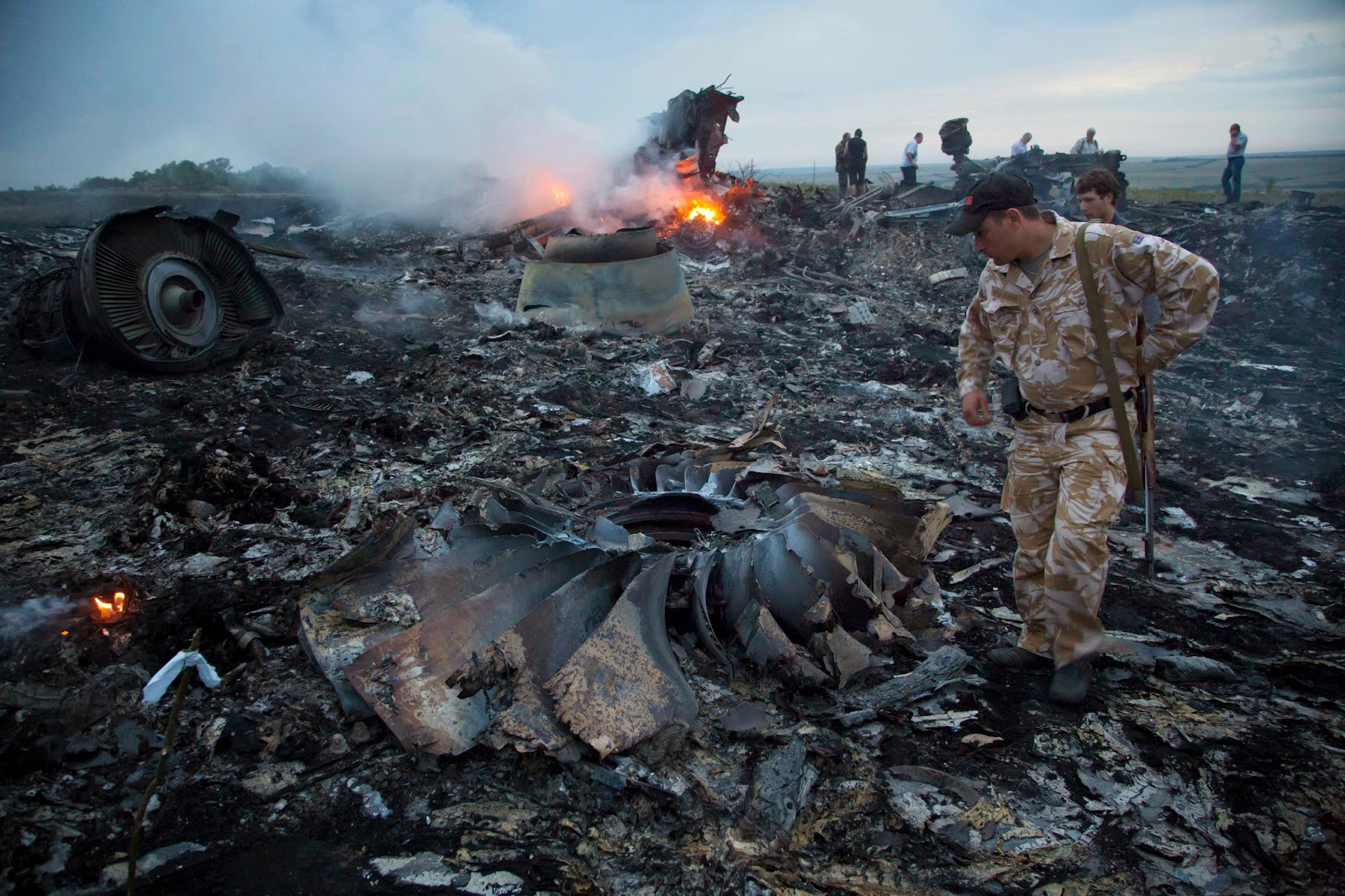 The Malaysia Airlines Boeing 777 with 298 people aboard was blown out of the sky today at 33,000 feet by what Ukrainian and U.S. officials described as a Russian-made antiaircraft missile. The plane crashed on a wheat field in a part of eastern Ukraine controlled by pro-Russia separatists. Everyone aboard was killed. (The New York Times, 17 July)
U.S. intelligence and military officials said the plane had been destroyed by a Russian SA-series missile, based on surveillance satellite data that showed the final trajectory and impact of the missile but not its point of origin, the Times reported.
The separatists had in recent days bragged about shooting down at least three Ukrainian military aircraft. This time, they could have mistaken MH 17 flight with a Ukrainian military aircraft.

“This is a tragic day in what has already been a tragic year for Malaysia,” said Prime Minister Najib of Malaysia. “If it transpires that the plane was indeed shot down, we insist that the perpetrators must swiftly be brought to justice.”


Photo credit: The crash site of a Malaysia Airlines 777 carrying 298 people in the Donets region of Ukraine. (Dmitry Lovetsky/AP/NYTimes)
Posted by Nader Uskowi at 9:41 PM

Ukrainian armed forces are also reported to having moved a Buk SAM battery close to the border in response to an alleged shoot-down of one of its operating Su-25 by by what they claimed to be a Russian fighter jet a couple days ago. Besides, considering the 10,000 ft altitude of the airliner at the moment of the missile hit, it seems unlikely that the separatist side could have pulled it. The Ukrainian ministry of Defense itself acknowledged that no such asset is reportedly present in their arsenal. The other occurrences where the Separatists bragged about taking down Ukrainian army planes were all in take-off/landing phase and low altitude operations during supply drops. None of them happened cruising phase at normal altitude. Now of course, lots of blame will be traded as to who actually acted in such a reckless way, and unfortunately the truth might not come out of it intact so long as the conflict goes on...

One of Putin's men had their finger on that button.

VERY SAD INDEED !-and why can't the sleeping UN do something to BRING some sanity in Ukraine ?.

When I heard the news I instantly thought of Iran 655. RIP to all those aboard.

Are there any similarities regarding responsibility for downing of the Iranian jetliner by the US, and their outright blaming of the RF for any involvment....

Ukraine in the 2001 downed Russian jetliner with significant number of casualties, during Ukrainian military exercises....

Poroshenko and his sponsoes did not want a ceasfire and instead intensified attacks and declared to annihilate "terrorists". Why did they let passenger jetliners to fly in that zone then ??

Why do some airlines have taken chances to fly over the war zone ??

There are different groups of rebels in Luhansk, independent sometimes in their actions, like in Syria, and one cannot blame others for something...

On the other hand if it was the separatists who downed it, they may did not know that it is a passenger jetliner, like the US claimed when they downed Iranian jetliner with almost the same number of casualties.

President Putin of the RF stated that the Ukrainian side contributed to that situation when they refused to follow negotiations with the separatists and do not care too much about civilian casualties during their assaults.

story from The Guardian

"Pro-Russia separatist groups in eastern Ukraine are hastily covering up all links to the Buk missile battery suspected to have been used to shoot down the Malaysia Airlines passenger plane, according to western-based defence and intelligence specialists.

As the UN security council called for a "full, thorough independent international investigation" into the downing of the plane, concern that a cover-up was under way was fuelled by a standoff at part of the crash site between observers from the Organisation for Security and Co-operation inEurope (OSCE) and rebel gunmen, which ended with a warning shot being fired.

Postings on rebel websites immediately after the crash boasted of having shot down what they claimed was an Antonov Ukrainian military transport plane, but these have been deleted."

OSCE and the UN inspectors' relevance and information from free press of the West were proved during false claims against S. Hussein that Iraq possesed WMD and cooperated with Al Queda.

Today the separatists may obstract accesses due to concerns, that those 'inspectors' may be infiltrated by special forces and attempts to plant false evidence ....