Huge Protest in London against War in Gaza 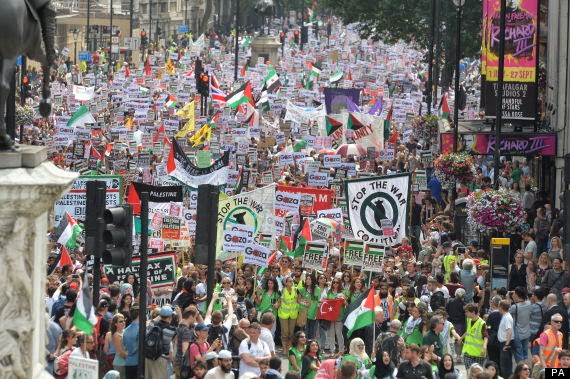 Incredible picture from the protest against Israeli war in Gaza; London, Saturday 19 July 2014.

not all are from London. The turnout is from other cities usually. At the 1978 (iran revolution) we took the train to protest in Hyde Park from 120 km away. Actually it is a low turn out considering the population of Muslims in UK.

NO offence intended,but if you protested for the "iran revolution" in 1978 then why are you still living in London and enjoying the freedoms of a secular life style it provides while Iranians are suffering IN IRAN under the yoke of religious tyranny and fascistic bigotry?

@Anon 12:56, No offence taken. At beginning of revolution there was no difference between Left and right in the goal of getting rid of Shah. The revolution took different direction 1358 onwards like any other revolution. Shah was a tyrant same as Khameneie, if you ask which was worst in oppressing more people I may say this regime but I do not want to live under any of them and happy that Pahlavi era has gone. I believe that is a part of the political growth of this country.

May be I should have said first, I was 7 years old at the time :) and was participating with my parents which were supporting the revolution and they were 100% not religious. People from all beliefs were against Shah for their own good reason. Still many of them live in Europe if not jailed, executed or dead. I think like my family many would say that was needed and this needs to change as well.