Two companies apparently scratched from what appears to be Iraqi Army 9th Armored Division (QRF) order of battle, as result of successful ambush by Islamic State irregulars. Action appears to have taken place 09JUL14 at al-Khalidiyah area in Anbar Province. Companies appear to have been advancing in column on narrow, unpaved road parallel with local canal, when attacked, with scores of lost AFVs, associated vehicles and equipment. 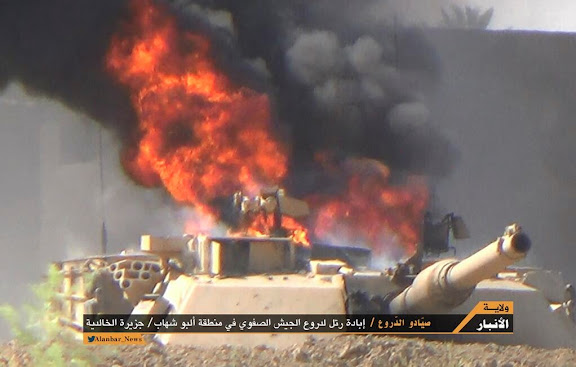 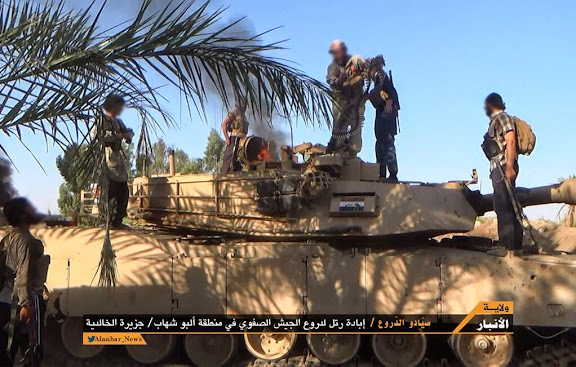 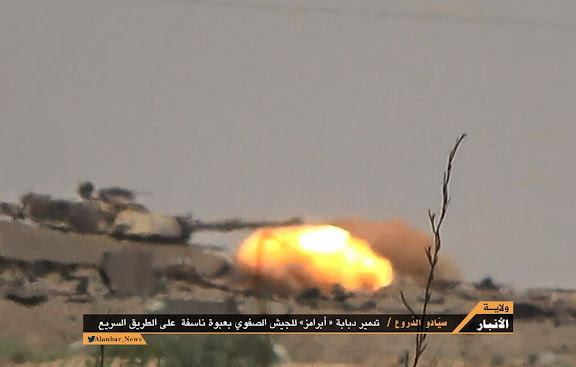 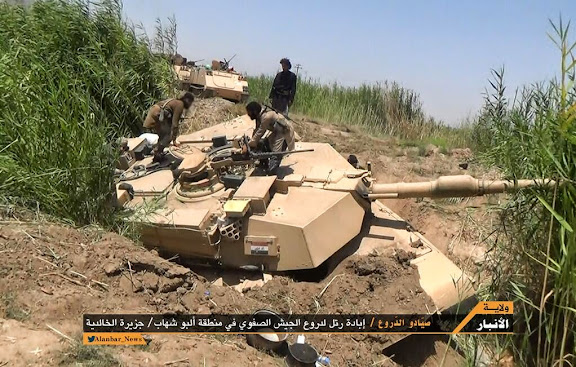 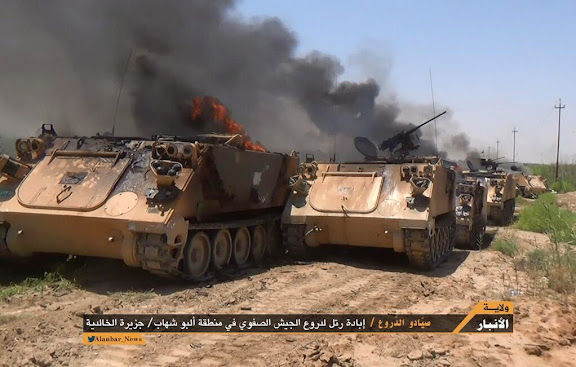 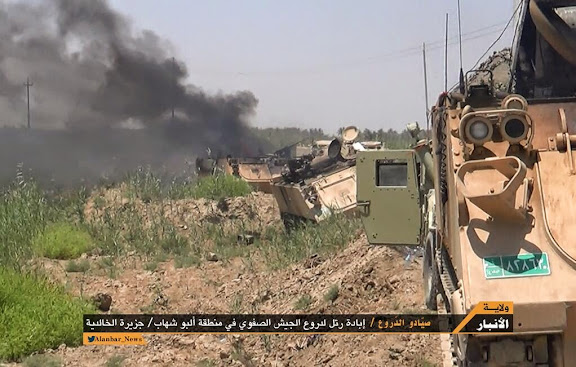 Scenes such as these suggest an Iraqi Army poorly rendered for counterinsurgency operations against determined, experienced irregulars; without supporting aerial observation and firepower previously rendered to IA by United States tactical aviation. 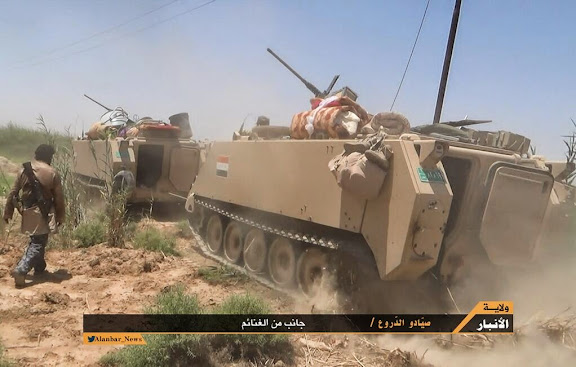 
Commentary: Such losses in American-manufactured heavy weapons unlikely to be made good through replacement by United States any time in foreseeable future, given U.S. political terms so far resisted by the Baghdad government, as well as apparent unsuitability based on below acceptable levels of leadership, tactical proficiency and will to fight.

Such conditions may further Iraqi-perceived necessity for IRGC-QF direction of war, to the extent it has in adjoining Syrian conflict.
Posted by Mark Pyruz at 5:13 AM

Again, it never ceases to amaze me how incompetent most Arab militaries are. Even the Syrian military, which isn't as inexperienced as its Iraqi counterpart, couldn't hold its own against mostly inexperienced fighters without Hezbollah getting directly involved in the conflict and the IRGC giving advice.

I have one question now. Does Iran have the economic capacity to fight two wars on two fronts, Iraq and Syria?

What if sanctions stay? Whence the money for all the military operations?

I wonder if some of those Abram tanks have fallen into Iranian hands for back engineering?

The money for all the operations comes from iranian oil. What do u think is the reason every 4 years ahmadinejad said: ups we have a devit of 500billions in our oil values :-))

it isn't as if Iran is going to have the industrial capability of building a great many of them. and it isn't as if iran has any need of improving the armored vehicles that they now have. Iran's tanks are more than sufficient for the job of intimidating and killing Iranian citizens daring to demonstrate against the Iranian regime

DOWNGRADED TANKS ,From a cunning BOD-

@These tanks you see burning like polythene are not the same grade the US military is using or exported to potential friends in the West ,History's most cunning empire [US],SELLS THESE DOWN GRADED Abram Tanks ,F/16s,night vision goggles,UAVS,and all sort of 'high tech' military tools to ARABS !.rob them of their wealth,instil fear in their hearts , surround them,and make them feel protected by these military tools,BUT the truth is that these tanks, and f/16s are a joke !

Failures of this degree are unprecedented in Iraq's modern history.

The military high command should refrain from launching more offensives for some time, shore upp existing defensive lines and create new ones around Baghdad as well as shut down any possible route that leads south past the capital to the other major urban centers, and wait for American expertise.

Brig. Gen. Basrawi (IQAF. ret)July 15, 2014 at 1:28 PM
"wait for American expertise"
Is that meant to be a joke?,last I looked the us isnt exactly rushing to iraqs aid,at this point the only ones who might be capable of saving iraq or at least some part of it is iran not the us