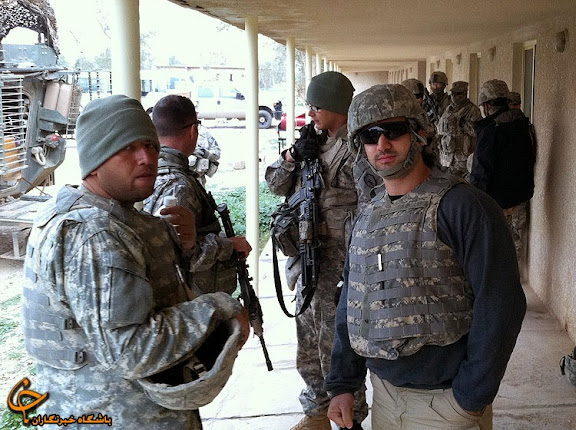 Right: Amir Hekmati, photographed while serving as a contractor for the U.S. Army in Afghanistan


Family and supporters of Amir Hekmati, a former United States Marine who is being held in an Iranian prison for “practical collaboration with the United States government,” gathered for a vigil in front of the White House on Monday to mark the 1,000th day of his detainment.

President Obama has personally brought up Mr. Hekmati’s case with Mr. Rouhani, including during talks in Vienna over the disputed Iranian nuclear program.

Mr. Hekmati has been jailed since August 2011, when he was in Iran visiting his maternal grandmother and other relatives for the first time. He was originally sentenced to death for suspected espionage, but that sentence was overturned by Iran’s Supreme Court. A secret retrial was held in December 2013, and Mr. Hekmati was sentenced to 10 years in prison. His lawyer is seeking a release after three3 years of the 10-year term has been served, which would make his earliest release date in August.

The Iranian criminal case against Amir Hekmati and subsequent conviction apparently centered on incriminating photos inexplicably kept on a digital camera in his possession. Among the many photos, there are depictions as a contractor for the U.S. Army in Afghanistan, many of them armed, his USG contractor card, as well as a depiction in traditional arab garb handling an assault rifle. At the time of his sentencing, these photos were published online in Iranian media.

It was a relief to see Hekmati's death sentence commuted. It is further hoped that a reduction in sentencing is rendered or barring that, a diplomatic breakthrough on the nuclear issue might provide IRI President Rouhani the political capital required to have granted the early release of Amir. Alternatively, a prisoner pardon/exchange with an Iranian national convicted of a sanctions-related offense would be hoped for, even though it's doubtful President Obama himself has the political capital required for such. This writer would very much like to see Amir returned to the United States. to be reunited with his loved ones.
Posted by Mark Pyruz at 4:00 AM

When CIA use "vaccine program" for espionage I would not be surprised to use an ex-marine for spying. Anyway, I don't know if he is spy or not but there is a good possibility
http://www.bbc.com/news/world-us-canada-27489045.

There is zero sympathy amongst Americans for the plight of Amir Hekmati, that I can tell you.

Mr. Hekmati was arrested in Iran and charged with espionage. After months of interrogation and investigation, the authorities dropped the espionage charges against him. Now you, hiding under the guise of anonymous, are telling us that there is a good possibility that he is a spy. This is outrageous, shame on you!

When the Iranian authorities dropped the espionage charges, they should have released Hekmati. Instead he was charged with “practical collaboration” with U.S. government. If by that the government means that as an American of Iranian descent he has worked for the government or served in the military, then there are Iranian-Americans and Iranian students in the U.S. now that have at one time served in the Iranian military or worked for Iranian government agencies. Does that make them “practical collaborators?” Of course not. Let’s hope the government reverses this “charge” as well and let this young man, which has been cleared of espionage charges, return to his loved ones.

Iran has a long and notorious history for the torture and severe treatment of its political prisoners and dissenters. It's an unfortunate aspect of the rule under Iran's mullahs who like any other tyrant are more concerned with preserving their power and hold over the people than in governing and leading them into a better future. Khamenei and his handpicked president Rouhani are going to chart a course for Iran that leaves little doubt over the fate of Christians, converts, political opponents, ethnic minorities and all others who are not in lock step with their Islamic view of the world. Do you think for a minute if any dissidents came back they would be treated well? It's especially galling considering this is the 25th anniversary of the 1988 massacre of 30,000 Iranian dissidents. For all of the attempts at portraying a new moderate face of Iran, Rouhani is a loyal career hardliner. You can see his resume at www.hassan-rouhani.info. The only real hope for Iran's future and political prisoners is regime change.

A note to +A: You want us to give you space here to re-try Mr. Hekmati on espionage charges here on this blog, after the Iranian authorities dropped those charges against him long time ago. That will not happen.