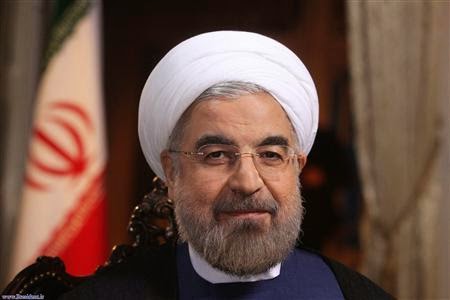 Iranian President Hassan Rouhani today rebuffed hardliners opposed to an emerging final deal with the West, saying Iran will never accept “scientific and nuclear apartheid.” Rouhani, in a live televised speech, tried to assure the country that the government will not “give up” its nuclear program.

The talks, resuming Tuesday in Vienna, face a 20 July deadline to hammer out a final comprehensive deal to limit Iran's ability to build nuclear weapons in exchange for ending the economic sanctions. The hardliners criticize the emerging deal as giving up too much while gaining too little from the West.

“If the world seeks good relations with Iran, it should choose the way of surrendering to Iran's rights, respecting the Iranian nation and praising Iranian scientists,” Rouhani said. “Iran's path to achieve nuclear technology has been a correct way and it will never stop... We do not want to withdraw one step in technology.” (IRIB/AP, 11 May)
Rouhani also said that Iran has nothing to offer except transparency in nuclear talks with world powers.


“We do not have anything on the table to submit to others except transparency," Rouhani said.
File Photo: Iranian President Hassan Rouhani (IRNA)
Posted by Nader Uskowi at 10:08 AM

Rouhani did not get into any details about the negotiations; what Iran was exactly giving up to have the sanctions lifted. It was a speech to silence the hardline opposition. But because of lack of those specifics, it’s very doubtful if Rouhani succeeded to win them over. They will continue arguing that the devil is in details, and Rouhani’s team is giving up too much to the West behind close doors. This is shaping up to be a hot summer in Tehran, politically!

If it's true that Iran has nothing to offer but transparency and Rouhani actually lifts all the sanctions as a result, then it would be a bigger win for Iran than for anyone else (unless this transparency involves military sites and facilities, which I guess Rouhani can never give to the West).

That's not how the talks are progressing. The world powers of course demand the transparency, but only to ensure that final agreement is adhered to; a means to verify Iranian compliance to the agreement, with all the issues that it is expected to cover. Transparency is not an end to itself.

And the hard-right is exactly objecting to what you just outlined above, that the negotiating team is only offering transparency to have the sanctions lifted. They say much more than that is being offered in the talks behind closed doors to reach an agreement. But the truth is the world powers will not agree to lift sanctions without Iran making some very tough choices and making significant concessions on the future of its nuclear program.

This is a very complicated process, and every line of the draft agreement will have consequences for both sides, and is being negotiated in a deliberate and methodical manner by both sides.

West start to talk about not lifting "all" sanctions or lifting them after several years and these sort of double talks (as expected). If sanctions are going to stay Iran can't (and no one in Iran can justify) remain with in the agreement or anything that comes after it.

Sanctions are not the issue. All sides agree that lifting of the sanctions should be part of the final deal. A number of problems remain to be resolved, lifting of sanctions is not among them.

Notwithstanding your wishes and sloganeering, the two sides expect to have a comprehensive deal soon. Let's hope that would be the case. You need to look for a war elsewhere!

it is. Just read new analysis that suggest that sanctions related to other issue will remain or Iran will have access to all of its money after 2-3 or even more years (after signing the final deal) the last one was the report from International crisis group

Why use the word "world" or "international community" while it is just 2-3 country that has problem with Iran.

Iran is meeting with six major powers to reach a deal. Those countries voted for all UN sanctions against Iran. Are you saying Iran should have not entered into negotiations with P5+1 and instead tried to resolve the issues with only 2-3 countries?

You are right. The current talks with P5+1 deals exclusively with Iran's nuclear program, and sanctions against that program. This is how the these talks were structured from the beginning. If Iran has issues with any country outside its nuclear program, it will not look for its resolution in the context of the current Iran-P5+1 talks, although a positive outcome of these talks would create a positive atmosphere conducive to resolution of other issues.

Iran is actually resolving the issues with 2-3 countries. I don't see India or Brazil or Indonesia in P5+1 and even China and eventually Russia are rather OK with Iran. It is just US, UK, France.

Anon 5:27 is getting at is that back when those 6 countries demanded Iran give up all enrichment period and Iran refused, they said Iran was snubbing the "World" or "international community". As if the other countries in the world didnt matter.
When the N.A.M (120 country body) supported irans nuclear program and the right to enrich, the 6 countries continued the mantra that "Iran was snubbing its nose at the world".

But the truth is that Iran needs to deal with P5+1 to have the sanctions lifted. And I hope they do. NAM is not of much of help here.

Am not trying to create a diversion but the use of the word 'world' by the p5+1 group is hypocritical. They are the major powers no doubt but the word 'international community'? Where does that leave the NAM? They should just end the pretense or propaganda and be called what they really are which is 'international bullies'.