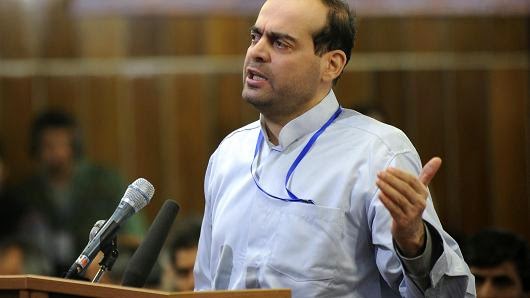 A total of 39 defendants were convicted in the case. Four received death sentences, two got life sentences and the rest received sentences of up to 25 years in prison.
The trials raised questions about corruption at senior levels in Iran's tightly controlled economy. Mahmoud Reza Khavari, a former head of Bank Melli, Iran’s national bank, escaped to Canada in 2011 after he resigned over the case.


File photo: Mahafarid Amir Khosravi speaks at his trial in a court in Tehran, Iran. 18 February 2012. (Hamid Foroutan/ISNA/AP)
Posted by Nader Uskowi at 10:25 AM

On yahoo news under this story there are thousands of comments from Americans who wish the US would do this to its bankers and congreesmen too. But instead in the US the bankers who embezzle american tax payers money are given mansions and awards by the congressmen theyve bought.

Your comment is a very good enlightening for those who see the US as a beacon of 'any kind wisdoms'.

In reality those their "wisdoms' and values have more common with propaganda and false pretenses, than a sound realities.........

Taxpayers have to subsidize and bail out businesses, such as Goldman & Sachs and others, who make easy money on speculations and accesses to 'exclusive' information.

This blogger has always been against capital punishment, especially in cases that are financial in nature, being in Iran, China, or the US.

What makes this particular case so important is the involvement of almost all state-owned banks in the scandal. Which is also another significant alarm to governments everywhere to get out of private banking business. The corruption it could create will affect the very fabric and credibility of the governments themselves, here the Islamic Republic.

This man was a corrupt businessman and not part of the establishment. He should have been locked away for life and not barbarically executed. Who knows, perhaps if he had a beard and attended the Friday prayer at the front row with a rosary in hands, his life would have been spared. However, the one who was in charge of the nation’s purse managed to get away clean with possible help from his front row brothers, living a luxury life in the west. Canada should do the honourable thing and hand Khavari in to face the justice for betraying the Iranian nation with assurance of a fair trial. He deserve a severe punishment short of an execution if found guilty.

The whole regime is corrupt. How about Rafsanjani and Iran's stolen billions $$$$?
One of Khameini's bank accounts has an estimated $95 billion. The businessman executed
was a scapegoat for the regime.Corruption in the islamic regime starts from the very top.

and if thousands of Iranians wrote comments in Iranian news sites demanding that the corrupt government officials in the Iranian government who have been taking money from the government funds where arrested and put on trial, those comments would not be published.

corruption in the Iranian government is vast, deliberate and organized. it's directed by the aides of the leader and Iran is never going to do a single thing about it until the regime is changed.

the people who are involved are also involved with censoring the Iranian press and trying to keep the truth from the people.

Economic crimes were a capital offense in Great Britain during World War II.

yet again, someone compares the peacetime Iran of today to a different country from previous centuries while that country was engaging in a great war.

lousy attempts at comparison in attempt to defend a regime that is also lousy.

Corruption is part of Iranian culture and rather than condemn it we call it (zerangi) when our friends and family are doing it and has been there from the achaemenid era. We only condemn it when those in power are those whom we disagree with, and when those in power are thos we agree with we deny its existence. Thus everyone but the monarchists consider the pahlavis as corrupt, everyone but supporters MKO consider the Rajavi's corrupt, and everyone but the most hardcore enghelabis consider this government corrupt.

Even Iranian Jews who moved to Israel like Dan Haluts, and Moshe Katsav

This permeates through all political factions
http://articles.latimes.com/1989-09-20/local/me-69_1_visa-fraud

Growing up Ive noticed this permeates our culture as a whole.

Whats so "peace time" about Iran today? Everyday politicians on Fox news are talking about bombing Iran. McCain even sings songs about it.

No comparison of the Islamic Republic to a country in the midst of a war, and no railing against McCain, could hide a basic truth: Corruption at highest levels is rampant in the Islamic Republic. The fact that so many senior leaders of almost all major state-owned banks were involved in this fraud is a proof of it. These days add the even larger Babak Zanjani fiasco, which could not have possibly taken place without support from high levels of government and military. Corruption at the end destroyed the Pahlavis and is destroying the Islamic Republic.

The fundamental issue here is that regardless of the form and shape of regime (Pahlavis, Mazhabions etc), the Iranian culture breeds corruption, full stop. These high cases including that of Zanjani are just tip of the icebergs. This notion of “Kolahbardazi” is imbedded in the culture. Deception has been around for centuries and sounds like (as it is common in other Moslem, non-Arabic countries like, Turkey, Iran, Former Muslim republics of USSR etc) it is strongly correlated to Islam. At the final days of Third Reich, they had to recruit some Muslim soldiers from Albania etc and the conclusion was that the positive aspect of discipline imposed by the Third Reich ideology was to stop Muslim soldiers stealing from each other!

So if we take the sensation away, the corruption is imbedded in our culture. Case in point when the head of Bank Melli (who was the main suspect in all this) resigned and allowed to flee to Canada by way of Germany, the authorities first said that he was attending a banking conference abroad (interesting the guy has resigned but attending an official banking conference). Secondly, despite the fact that he was a suspect he was allowed to leave the Country (marvellous).

I personally have been to Iran few times in the past 4 years and every time have come across people that have no inhibition in accepting bribes. I believe that the culture breeds and encourages corruption. It is as if one cannot do Kolahbardari, then the individual is not clever. The morality does not come into it. Just put things in perspective, Iran’s total income for 2013 was 50 billion USD. So the some stolen by this group accounts for 5% of annual budget. The money stolen by Babak Zanghani accounts for 24% of GDP. According to http://en.wikipedia.org/wiki/Economy_of_Iran, the Public debt is 18.7% of GDP (2013 est.)

The last sentence of your first paragraph spoiled an otherwise accurate view of the contemporary Iranian culture. The corruption in Christian Africa is as bad as and if not worse than Moselm Africa. It would be foolish to assume that Chistianity has something to do with it. Poverty and educational system have more parts to play in shaping a culture of corruption than religion . In fact some of the ultra conservative elements within the current system rank cleanest within the Iranian society.

@Uskowi,that is good news that the Islamic Republic is destroying itself.

Corruption is among "other" elements that have plagued Iranian society and values. There has not been (or I am aware of real discussions) on why the Pahlavi regime was toppled. All I can remember from teen years was that despite economic booms of 1970s in Iran (due to oil prices), there was a real cultural and wealth gap between the urban middle and westernised classes and the vast majority of population who lived in rural areas. Include in the latter the demographic shift of people to Tehran and other large cities, thus creating rural ghettos (reminiscent of shanty towns) around major population centres. This was coupled with the usual intolerance of religious (read Islamic) edicts that played well into the hands of mazhabions sugar coated with some usual left wing imported ideology by the likes of Shariati. The society was polarised between educated classes and the religious masses. Has there been some form of acceptance by both sides and looking for common grounds (respect for individual's thoughts and value), perhaps we would not have been in a sorry situation as we are now.

OK that is all water under bridge so to speak and gone. The problem as I see it now (especially after few recent trips to Iran) is that the educated or enlightened middle classes have all left Iran or their numbers are severely depleted. The regime (aware of this issue) has done everything in its disposal to brainwash the young population. Sao there is really no middle class left to push for real changes. Granted there are Rafsanjani, Rouhani, Green members etc but all these are from the same classes. Even Zarif and Khatami both come from wealthy religious families unmistakably linked to this establishment. In other words they are the manifestation of this regime in less confrontational form. Frankly I cannot see how this regime is going to collapse through some collaboration. The only option is for the regime to come to a standstill and melt away. May be if Khamenei passes away, there is a chance that this regime collapses within. To me they have really exhausted all the options after 30 off years. Even those lower classes are feeling the heat.

and it exists right here in the good ole USA too. Banks in the USA control the government thus indirectly making them the puppet masters behind the government.
http://www.realclearpolitics.com/video/2014/05/20/sen_elizabeth_warren_blames_reagan_for_collapse_of_middle_class.html#.U3vfeNPsHVs.facebook