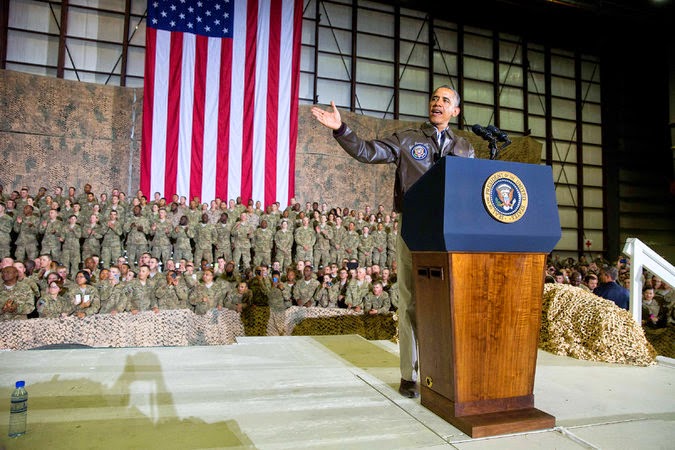 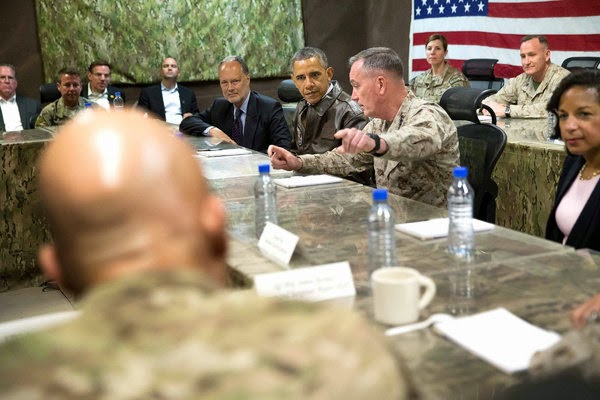 On the eve of Memorial Day, President Barack Obama arrived in Afghanistan to visit U.S. soldiers. Upon arrival at Bagram Airfield, the president held a briefing with General Joseph Dunford, the commander of U.S. and allied forces in Afghanistan, Ambassador James Cunningham and other senior U.S. military and civilian leaders in the country.

Obama then spoke to about 3,000 American troops gathered in a hanger at Bagram and thanked them for their service.

Obama also talked on the phone with Afghan President Hamid Karzai for about 15 minutes.

“Once Afghanistan has sworn in its new president, I’m hopeful we will sign a bilateral security agreement that lets us move forward,” Obama said. “And with that bilateral security agreement, assuming it is signed, we can plan for a limited military presence in Afghanistan beyond 2014.” (NYTimes, 25 May)
Top photo: President Obama spoke to troops during his visit to Bagram Airfield, Afghanistan. (Doug Mills/The New York Times)
Bottom photo: President Obama attended a briefing with the ambassador to Afghanistan, James Cunningham, left, commander of U.S. forces, General Joseph Dunford, and Susan E. Rice just after arriving at Bagram Airfield. (Doug Mills/The New York Times)

If the United States would take out the Iranian regime, 80% of the Mideast's problems would be solved.