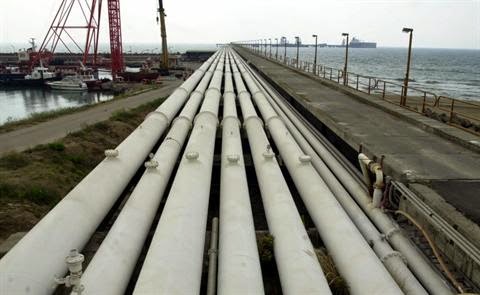 The first 1 million barrels of Kurdish crude oil is being loaded on a tanker today in Turkey’s Mediterranean port of Ceyhan. The oil was transported to Ceyhan from the oil fields in the Kurdistan Region via a new pipeline. (Reuters, 23 May)

“Loading will be completed today,” Turkish Energy Minister Taner Yildiz told Reuters. The tanker was scheduled to sail late Thursday, but the buyer was not identified.

The move will likely infuriate the government in Baghdad, which claims sole authority over Iraqi crude and declares any independently sold oil as “smuggled.” But the Kurdish Regional Government of Massoud Barzani considers its control over the oil fields in Kurdistan critical to the future of the Kurdish region.

Barzani has been calling for more autonomy for Kurdistan and pushing for creation of an Iraqi confederation that would loosely connect Kurdistan to other parts of Iraq. The critics believe such arrangement would be a precursor for Kurdish declaration of independence. Today’s historic move by Kurdistan Region to sell oil independently in the international market brings it closer to such prospect.
File photo: Oil terminal at Turkey’s Mediterranean port of Ceyhan. (Burhan Ozbilici/AP)
Posted by Nader Uskowi at 5:32 PM

I really dont understand why my government (Turkey) acts like this! If Iraqi Kurdish religion gains economic and politic power, the southeast part of country will be seperated to establish autonomy Kurdish state.

not necessarily. an independent Kurdistan in Iraq doesn't mean that part of Turkey will try to secede if Turkey doesn't resume the oppression of Turkey's Kurds.