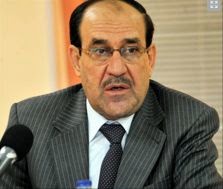 The office of Iraqi prime minister today denied reports that Mr. Maliki has secretly traveled to Tehran to seek Iran’s influence over Iraqi Shia parties for forming a new government. Arab daily Al Hayat had reported that Maliki was in Tehran to strengthen his position with other Shia groups.

“I was surprised to see a report by al-Hayat Saudi Newspaper over a secret visit by Maliki to Iran to conduct dialogue over the Shiite talks concerning the new government… This report is groundless and absolutely false and he will head the Council of Ministers session today,” said Ali al-Musawi, Media Advisor of the Premier, Nouri al-Maliki. (IraqiNews, 4 May)

Maliki’s State of Law coalition received the highest number of votes in Thursday’s parliamentary elections in Iraq; his coalition could win over 100 of parliament’s 328 seats, enabling Maliki to form his third government with the help of other Shia groups, and with only token representation from Sunni and Kurdish parties.

Meanwhile, Muqtada Al-Sadr warned of a Shia revolt in southern Iraq against Prime Minister Nouri Al-Maliki if he is declared to have won the election, claiming that Al-Maliki could only win through “manipulation of the figures and fraud.”

This means that Maliki will face stiff opposition from rival Shia parties to form his third government, even if his State of Law coalition wins more seats that other parties.

The likes of Ilyad Allawi and members akin to those of the Iraqi National Accord are what Iraq need the most at this moment in time.

The Iraqi people deserve a measure of praise for their participation in the election. Despite the violence, which by the way was noticeably down from levels during the 2008 election (while still under American military occupation), this year there was an impressive turnout of over 60%.

Last time around it took nine months and Iranian political assistance to form a government. Yet to see how long it takes this time around.

turnout was not impressive. it was lower than the turnout in 2010.... when the Americans were still there.

it's like you're still fighting, or at least being a little drummer, for the slave owners in the American Civil War,

Until the Iraq people put aside their differences with each other and work together towards a single party for Iraq, I do not see much change on the horizon.