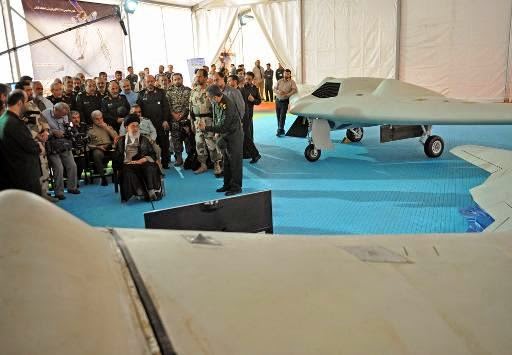 Iran said today it has successfully copied a U.S. drone it captured in December 2011. In a ceremony in Tehran, attended by Supreme Leader Ayatollah Ali Khamenei, the IRGC Aerospace Force showed the captured American RQ-170 Sentinel next to its copy built in Iran. IRGC-ASF announced that its drone will be flight tested soon.
“This drone is very important for reconnaissance missions,” Khamenei said, standing in front of the Iranian copy of the American drone. (IRIB/AFP, 11 May)
Iran has developed a robust drone program, and has built 4-5 different models for reconnaissance and operations use. An Iranian TV documentary aired today showed an Iranian drone above a U.S. aircraft carrier in the Persian Gulf. It was possible to see American personnel working on planes and helicopters aboard the carrier.

Just took them 3 years to build a mock-up ! Well done.

Two more months until we can test Iran's military claims. I felt bad about seeing Iraq and Lebanon attacked, but I will really enjoy seeing the American and possibly Israeli military pummel this despicable country.

Funny thing is,it is a mock-up. Just like the other "stealth" mock-up they paraded.

They said, "it will be flight tested soon." That pretty sums up their copied drone,worthless.

as Iran captured the Drone, you said it is a Mockup
until The american asked to retutn the mockup

And 3 minutes to make one land on Iranian soil, with mock Electronic Warfare capabilities acknowledged by American literature. Like their mock space program and their mock SLVs, sending mock satellites into space detected by NASA, their mock MRBMs making Israel stack up on ABM systems and Washington do everything to link the nuclear issue to their missile program and desperately try to curtail it, and refraining from an attack on their nuclear sites to this day. Like their mock SRBMs proven to have 50m precision to many observers including anti-Iran ones in Syria. Hell, let's go all the way : their mock army nobody cares about. In fact the USN, GCC and IDF are all being nice to Iran by not reducing them to smithereens despite Iran's hostile stance for so many years through its policies and strategies everywhere it can in the region. It is clear fact that these people never do that to anyone they oppose, a renowned truth. Indeed, Israel for instance has never, ever engaged an enemy they hate militarily, all diplomacy ! In fact, they're all scared by Iran battalions of suicide bombers running all the way from Tehran to Tel Aviv or Washington, or Riyadh for that matter. They know all the rest is just that : mock-up. A big and annoying, seemingly untouchable one for a few years already. And despite what you might think, I for one am no fan of them. But I have no more love for anyone belittling them in such a hasty and childish way. That is exactly what makes them go forward : people from the outside proving them they can't stand progress on any level so long as it comes from the IRI, no matter how genuine it is and how creative and hardworking is their scientific community, politically motivated or not. Keep on feeding their propaganda machine, it has made wonders outside of North Tehran.

You wanna criticize, don't be a hater, be constructive and real, there are so many ways to take the IRI to the ground head-on, but here, the growing military industry and its R&D, is exactly where you cannot decently dismiss Iran the easy way. Just too many facts going counter to the "Iran is a paper tiger nobody is afraid of"...

You can perpetuate your barkings.........and that is all you can do.
You will sooner or later whiter away and Iran will achieve world power status and make manned flight to the space !!

The real test came when Bush the war monger didn't dare to attack Iran while Iranian agents were busy killing American soldiers in Iraq. Why you think Bush stop short of a war? Was he pussy or it was because of huge cost?

Learn how to spell "wither" when you start a personal attack "+A".

would make sense for it to be a target drone... wouldn't it?anything else seems kinda useless seeing as they are surrounded by amercian built and/or manned radars (which would know the specs of this drone too well to allow it to be used for surveillance/intelligence operations).

AnonymousMay 12, 2014 at 5:30 PM
Its pretty silly to assume that just because the gulf arabs operate western radars that they will have no trouble detecting irans copy,drones by their very nature are not so easy to spot,one like this optimized for stealth would be more than a little difficult to detect

Stealth is stealth. So despite the fact that it is indeed the RQ-170 is US-made originally and hence gives its maker additional ways in locating their plane through tuning their detection radars in an optimal way, but american operated drones from a friendly fleet usually have plenty of ways other than direct radar to make their position known to commanding units via encrypted satellite link, camera live feed, precise auto-pilot maps and specifications, and other triangulation methods providing its users with regular position updates in-between maximum EMCON phases during missions. Considering Iran will most probably integrate proprietary Iranian, Russian and Chinese-made encrypted IFF and positioning methods less familiar to US forces, intrinsically making their drones significantly more difficult than usual for US radars to precisely locate a patrolling Iranian RQ-170. The very same way Russian-made SAMs possessed by the Georgians and tweaked by the latter were able to take down several Russian air-force planes back in the war in South Ossetia despite the fact that the latter were supposedly, in theory able to anticipate their capabilities by knowing their specs to the letter. Copycat tech takes advantage of existing tech and design, but does not necessarily mimic that tech to the nanometer, and rightfully so.

Yeah sure,with a $50 billion economy "Iran will achieve world power status".
Looks like the sahab zaman theocracy has nurtured some crackpot theorists out there.

doesn't much matter whether the Gulf Arabs will detect them. what matters is that the US Navy will.

AnonymousMay 13, 2014 at 8:47 PM
Oh!?,do you mean just like the time an iranian drone took close up video of the flight deck of a carrier in the gulf and the us navy was completely unaware of its presence,and that was the non stealthy type
http://dailycaller.com/2014/03/03/video-iranian-drone-buzzes-u-s-aircraft-carrier-in-persian-gulf/

@8:54 AM
When the kid gloves come off it will be the end. Don't delude yourself with the tricks the West plays.