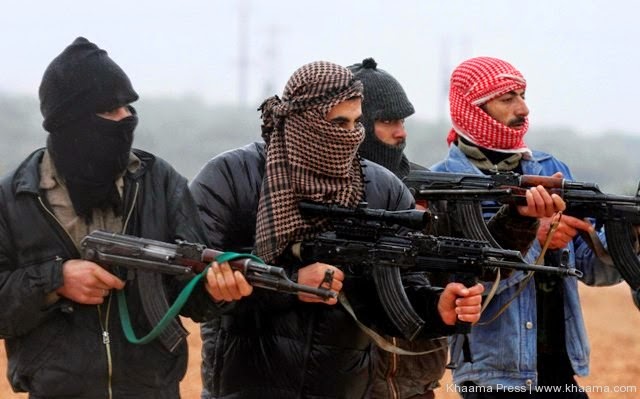 “Poor Afghan refugees are recruited and sent to fight in Syria where they are killed and the government of Afghanistan should resolve the issue,” said Muslimyar. (Khaama Press, 18 May)

Afghan refugees are granted Iranian residency, $500 a month salary, school registration for their children, and charity card if they join foreign militia groups set up by the IRGC (Quds Force) to fight on the side of the Assad regime in the Syrian civil war, Afghan religious leader Ayatollah Mohaghegh Kabuli told the Wall Street Journal on Thursday. (Wall Street Journal, 15 May)

The Afghan Senate should care more of the recruitment made by Prince Bandar in Pakistan and Afghanistan .THE world has been seeing hordes of fighters entering Syria from the Balkans and a lot of them Afghans and Pakistanis ,
many media sources have attested this -wonder why USKOWI can not bring anything to to vilify the CIA and its role on the Syrian mayhem but comes quickly to point a pistol on the head of the Qud's force!,

Fazal Hadi Muslimyar is a Pashtun. He is among the leadership of a Sunni fundamentalist political party in Afghanistan that is anti-Shia.

Naturally he would be hostile to the recruiting of Shia-Aghan elements in support of Syria in that conflict.

Muslimyar is quoted here because he's speaker of the house. Probably more than being hostile, the Afghan leadership is astound at the report that hundreds of Afghan refugees are being recruited to join QF's sponsored militia groups in Syria. I don't think they knew that.

B.M.A., are you suggesting that you and I start a new blog on the U.S. or Syria?

And if you think that the Quds Force is not the major story in Syria, please try to update your info regarding the civil war there. And naturally, QF's involvement in Syria is major news for our blog on Iran. Any objections?

Mr. Uskowi and all friends here,

This is my first post here and probably the first on any website in a long time.

But this issue has forced us to point out this CLEAR AND ABSOLUTE LIE, due to which the Zionist supported Wall Street Journal should also be exposed in the eyes of free thinking people.

Personally, the reason we had investigate this further was the attribution of this report to the Grand Ayatollah Mohaqeq Kabuli THAT HAS BEEN CLEARLY DENIED ON HIS OFFICIAL WEBSITE.

However, unfortunately, his website is primarily in Farsi language only but Google translate would help.

Hence, i expect Mr. Uskowi and the management of this blog to look at this issue further and expose this statement as a false attribution.

Dear Uskowi
The previous poster is in right
the Saudi and Qatar and Pakistani rekruting afghan mercenaries in afghan soil , Iran rekruting the afghans in iranian soil.
why the senate does not care about own country ?

BODY Armour that is Uskowi !!

Once more and yet again , on the issue of the CIA and its dirty linen in the globe in general and Syria in particular, you are doing what you know best - and that is to shield and deflect any bullet reaching the BOD ! despite horrendous activities and dirty responsibilities !!!.indeed i envy you in your zeal !!.

Soon as one reads the word "Zionist" one knows the real intentions of that blogger.