'Iran has built a second Hezbollah in Syria' - IRGC

IRGC Brigadier General Hossein Hamadani, former commander of Mohammad Rasulollah Corps for Greater Tehran, has been quoted by Fars News Agency as stating Iran has built a "second Hezbollah in Syria," meaning it now possesses a projected line of defense at both southern Lebanon and Syria.

Hamadani also confirmed Iran's role in providing training and urban warfare tactics, employed with success on the battlefields of Syria. He went on to state "Today we are fighting for and defending the interests of the Islamic Revolution in Syria, we are at war," further claiming a large number of militiamen trained and deployed for the conflict in Syria.


Fars News Agency later rescinded the story and substituted an edited version. Below is a video grab of the original report (h/t BBC Persian): 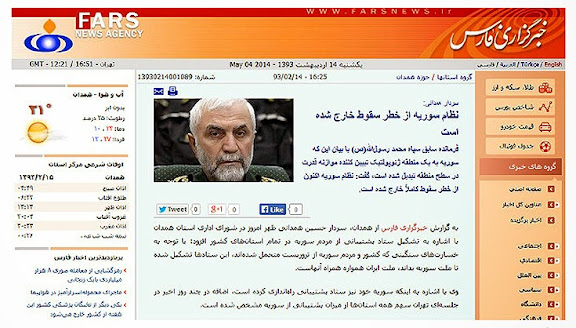 There is a tone of triumphalism beyond the usual rhetoric among senior IRGC leadership, over its tactical successes in the Syrian conflict. Recently, Armed Forces General Staff HQ Deputy IRGC Maj. Gen. Gholam Ali Rashid candidly stated Iran had modeled the NDF (militia forces allied with the Syrian government) on Iran's Basij.

Evidently, IRGC leadership is buoyed with what it regards as successful intervention in Syria, seeing for itself and allies positive implications for related conflict within the wider region.
Posted by Mark Pyruz at 10:50 PM

WHEN the US comes openly to tell the world that it is arming and training the Rats in Jordan, and that they are now armed with lethal weapons,WHAT HAS IRAN to do?-the noble thing is to make low key ,unofficial announcements about the sacrifices the country is making in Syria!.

You have some very filthy RATS of your own in the shape of "BOKO HARAM" that he US and the UK hopefully will eradicate. Maybe then you will be a bit grateful to them then !

Boko Haram Islamists were behind the massive bombing over there and the kidnapping of an entire school worth of female students, numbering 150 or so.

As a fundamentalist he might be a Boko Haram supporter...

Boko Haram are aligned with the Saudis who are american puppets ... Opps I meant allies. Boko Haram believe that women should not be educated at all. In Saudi Arabia until the year 2000 the government didn't bother to print birth certificates for daughters... a father hand wrote their daughter's name in a corner of his birth certificate if he felt like it :)

Boko Haram are wahabis. Wahabi-ism is the saudi royal family's personal brand of islam. You have to learn about it in Saudi Arabia, or you have to go to one of their supported "madrassas". Thats the same place young muslims get brainwashed into becoming terrorists for one of the "al qaeda" offshoots. Boko Haram is an "al qaeda" off shoot. They felt that "al qaeda" was too soft and created their own version of it :) All "al qaeda" members are sunnis; they are "Wahabis." There are NO shia "al qaeda" members.

Wahabi sheikhs in saudi arabia and pakistan have repeatedly said publicly that if you kill a Shia you will go to heaven. The united states trained "al qaeda" operatives in the Washington based school of Americas in asymmetrical (in other words terrorist) warfare when "al qaeda" was fighting the soviet union in Afghanistan; They were called mujahideen then. Some of those SAME people later became the top commanders of Bin Laden's "al qaeda" as we know it. You know what happened next ... :(

The US supports the Saudi royal family; which is the government of Saudi arabia. They are all Wahabis. You have to marry into the "government" over there. ... now connect the dots if you have enough brain cells left :D

The Saudi royals are about 50,000 people. The rest of people in saudi arabia HATE their government. The government (read the 50,000 royal family members) takes all the oil wealth and spend it buying sports cars, hotels, palaces, and hookers around the world. They do so with the public support of the united states.

The US provides weapons, tactical training, loans, military and intelligence attaches, and pretty much do whatever is required to keep the Saudis in power. Without US support the saudis would fall in a couple of years.

Oh, and you DID know that Bin Laden was related to to the royal family by blood right?