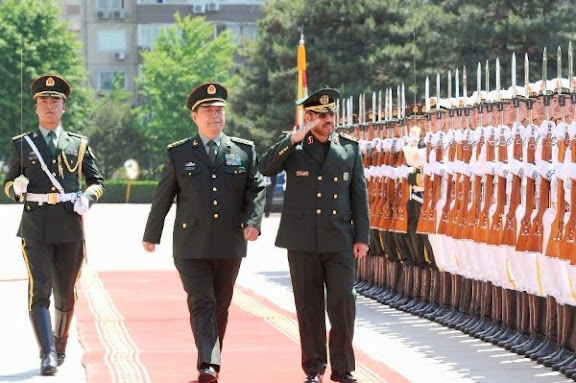 This is Dehqan's first visit to China since he took office. He voiced the hope that the two countries would continue to play a positive role in safeguarding regional peace and stability.

Dehqan arrived in Beijing on Sunday at the invitation of Chang, starting a four-day official visit to China.

China has a recent history of being subjected to terrorism by Al-Qaeda backed Xinjiang militants, while Iran supports efforts against Al-Qaeda linked fighters in Syria, Iraq and Lebanon.
Posted by Mark Pyruz at 2:00 AM

Quite a flurry of Iran military international relations currently transpiring: IRI DefMin in China, IRIN at Karachi and Port Sudan, Iran helping to effect withdrawal of rebel fighters from Homs in Syria, etc.

yes, soon we'll all be reading about the upcoming Iranian Civil War

Yeah, we will be reading about the Iranian Civil War in your dream. That is how pathetic you becomes when you fail to put a check on our hatred. Am really sorry for you.

There won't be any civil war because the armed forces know that the regime is so rotten that they are not willing to support Ahriman dictatorial theocracy when it slips up. Of course there will always be die hard elements within the security forces. And we know what awaits them if they resist the people.

Iran has been exercising very smart international military policies, where they create options for competitions from Russia and China for a future deliveries of modern weaponry to Iran.

Russia, at this time, has to overcome the major problem with its weaponry deliveries to Iran, which is related to the $4 billion penalty related to the cancelation of the S-300.
However, there is a high probability that next year will see event of that delivery (S-300) fulfilled.

Regarding substitutes for that penalty, there are posibilities for a transfer of other technologies and weaponry, including the Pantsir systems, naval vessels' mounted air defenses and license for a jet engine, as well as an Iranian access to Russian satellite technologies, which were envisioned in the recent (April 10, 2014) talks between Acting Director of the Iranian Space Agency Hamid Fazeli and his Russian counterparts.......