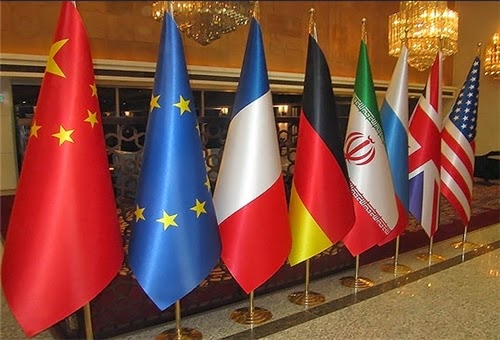 Iran and world powers will begin a new round of nuclear negotiations on Tuesday and Wednesday in Vienna. Iran’s Foreign Minister Javad Zarif and EU foreign policy chief Catherine Ashton had a working dinner tonight, with Zarif telling reporters afterward that they talked about method of continuing talks and importance of mutual respect.

Upon arrival in Vienna, however, Zarif had said that the two sides were ready to start drafting a final comprehensive accord in two weeks.

“We will finish all discussions and issues this time to pave the ground for starting to draft the final draft in Ordibehesht (an Iranian month that begins in two weeks),” Zarif said. (Reuters, 7 April)

But Russia’s deputy foreign minister and chief negotiator told reporters Sergei Ryabkov was quoted by Itas-Tass news agency as saying that there were “no special expectations for this week’s meeting.”

“Talks on a number of issues were still in early stages and the meeting should produce a basis for further discussions,” said Ryabkov. (Itar-Tass/Reuters, 7 April)

Notwithstanding Zarif’s optimism, there are some very tough issues that need to be resolved before a draft agreement could be produced.

Scope of Enrichment: Iran has installed approximately 19,000 uranium-enriching centrifuges, with 10,000 of them currently operational. Iran does not want to dismantle a substantial number of the machines, which has taken it number of years at a cost of billions of dollars to assemble. The West wants the numbers decreased substantially to reduce Iranian breakout capabilities in future. Speculations are that the numbers being pushed by the West would be less than 5,000 of older IR-1 centrifuges, giving it at least six months forewarning if and when Iran decides to build a nuclear weapon. This is a tough one to negotiate.

The West also wants Iran to stop enriching above 5 percent permanently. Iran accepted the restriction in the Joint Plan of Action (JPOA), and could agree to it now. There would also be a limit to the stockpile of 5% uranium. The agreement would also entail a conversion of Fordo enrichment unit into a R&D facility.

Arak IR-40: The heavy water reactor as currently designed could produce enough plutonium annually for a nuclear weapon. The construction has been halted under JPOA. The West would push for radical changes made to the reactor. Speculations are that the proposal on the table would be converting the reactor into a light water reactor with half the power (20 MW) and using enriched uranium feed (as opposed to natural uranium).

The changes will effectively prevent a plutonium path to nuclear weapons, and will be very costly at this late stage of reactor’s construction. If Iran ever agrees to such terms, it would expect the West to pay for the changes.

Verification: The West wants IAEA’s verification team to practically be present at nuclear facilities, including Natanz and Fordo, and the ability to inspect all other facilities at will; verification abilities beyond the Additional Protocol.

On a related matter, the IAEA will be tasked to resolve questions on the history of possible military dimensions (PMD) to Iranian nuclear program in years past, specifically the work performed at Parchin. The IAEA report on PMD will probably a pre-requisite to a final accord. Verification issues are tough, but it is expected that the two sides could accept a compromise here easier than other issues.

Ballistic Missiles: Iran has repeatedly said the issue of ballistic missiles has nothing to do with nuclear negotiations and is off topic. The reality is that one of the end games of negotiations is the lifting of all Western as well as UN Security Council sanctions against Iran, and the UN Resolution 1929 specifically prohibits Iranian activities on ballistic missiles capable of delivering nuclear weapons. That resolution needs to be addressed, if not as part of the main negotiations, but perhaps as a confidence building measure to limit Iran ballistic capabilities at its current levels. This could still be very tricky and difficult for the Iranian negotiating team to accept.

Sanctions Relief: JPOA already defines the issue as the comprehensive lift of all UN Security Council, multilateral and national sanctions related to Iranian nuclear program. The two sides need, and are expected to reach a mutually acceptable timeframe for lifting of all sanctions and unfreezing of some $100 billion of Iranian assets held by foreign banks, basically the revenues from the sale of Iranian oil to different countries. This issue could be the easiest of all.