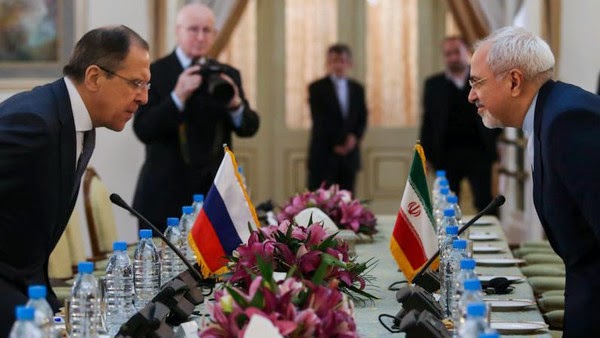 Iranian Foreign Minister Javad Zarif attended a meeting of Caspian Sea territorial states in Moscow today. The meeting focused on preparing an agenda for the fourth Caspian summit, which will be held in Russian city of Astrakhan in September. The heads of government would need to resolve the issues surrounding the division of Caspian’s resources, including its vast oil and natural gas deposits.

“During today's discussions, we've confirmed that the five Caspian states are responsible for the situation in the region,” said Lavrov. “Russia, Azerbaijan, Iran, Kazakhstan and Turkmenistan, are ready for cooperation in compliance with the ‘Caspian Five’ rules and principles.” (ITAR-TASS, 22 April)

The problem is Iran and the former Soviet Union had ratified treaties providing common management of the Caspian, treaties that were in effect at the time of the breakup. On 26 February 1921, five days after Reza Khan became the de facto ruler of Persia after a coup, the Persian government and Lenin’s revolutionary government, the Russian Socialist Federal Soviet Republic, signed, and later ratified, a treaty of friendship that recognized the exclusive use of the Sea by Soviet Russia and Persia. In 1935 and 1940, Iran and Soviet Union also ratified treaties providing for common management of the seabed and waters of the Caspian.

Iran argues, and rightly so, that the 1921/1935/1940 treaties are still in effect. The Islamic Republic will have a difficult time to accept any division of the Caspian seabed and its vast resources outside of those treaties. The alternative, under the “Caspian Five” principle, pushed by Russia, would leave Iran with as low as 15 percent share.

Navigating the stormy waters of the Caspian could prove to be tricky for the Islamic Republic. The ceding of nearly half the Iranian territory to imperial Russia by the Qajars in 1813 and 1828 is etched in Iranian collective memory as the most egregious treacherous acts in country’s modern history. Now, even an appearance of surrounding to Russia and its allies on the Caspian, and any comparison to what the Qajar royal court did at Golestan (1813) and Turkmenchay (1828) would be politically devastating for the regime.

The regime lost Iran's 50% of the Caspian sea after the collapse of the Soviet Union. Iran should have kept the 50% while Russia should divide up their 50% between their former republics.No thanks to the useless Qajars Iran already gave enough to those Russians. But somehow this regime reminds me of the old Qajars with their treacherous ways. Remember what mullah Tieb said,"Syria is more important than Khuzestan."

The main point is that Iran has no leverage against any other Country these days because of their antagonistic policies that has alienated every worthy country. Their best friends are a bunch of psuedo terrorist nations like Syria, North Korea, Venezuela and Cuba. On one hand Iran needs Russia and on the other hand it wants to confront Russia! What a joke. This is the true meaning of "Na Sharghi, na garbi, jomhourie Islami"

Anonymous April 22, 2014 at 2:38 PM
Did you even bother reading the article before you started the usual malcontented rant?,iran has given up nothing,this is a summit to decide on the division of resources,now whether zarif and co will try the same appeasement policies with the russians that they have with the west who can say

Iran needs Russia? What do we need them for I wonder? Voting "yes" for UN sanctions on our country? Complying with the U.S and the EU on bilateral anti-Iran sanctions? Banning the export of Russian defense systems to Iran after the deal had already been signed and the crew sent for training?

Russia is as unreliable as it gets.

Off course I read the article you vexatious apologist. Or else I wouldn't have described this anti-Iran regime as being very similar to the treacherous Qajars. But judging by what mullah Tieb said about the importance of Khuzestan as compared to Syria,I wouldn't hold your breath.

Anonymous April 23, 2014 at 11:52 AM
If you read it then you apparently did not seem able to comprehend it,which part of "iran has given up nothing" do you fail to understand!?,or do you just prefer to keep on repeating "The regime lost Iran's 50% of the Caspian" because it suits your rabid anti government ideology to do so,as for syria being more important than khuzestan,at the moment whats happening in syria is a lot more important for pretty obvious reasons.

I'm not ashamed to hide my disgust at the anti-Iranian ideology that is occupying Iran. And I don't need a vexatious apologist telling me how to behave against the so-called "government" who easily uses torture,rape and murder against my countrymen.Iran under the regime of ignorance has lost its right to 50% of the Caspian sea resources. Since the collapse of the Soviet Union it has now been reduced to 13%. No matter what happens to Syria it doesn't make an iota of difference when compared to any part of Iran's soil.

He who made that statement didn't mean that Syria is more important than Khuzestan. It's AS important as Khuzestan. You have to consider his statements against the background of Iran's grand strategy for itself and the region.

AnonymousApril 23, 2014 at 4:44 PM
"Iran under the regime of ignorance has lost its right to 50% of the Caspian sea resources. Since the collapse of the Soviet Union it has now been reduced to 13%"
This statement is untrue,why do you keep on repeating this lie?,do you think that if you repeat it enough times it will somehow become true?,all that does is to destroy your credibility.I also find it rather absurd that because I`ve disagreed with you and pointed out the mistakes in your argument that this makes me a "vexatious apologist" for the iri,but then I suspect that anyone who disagreed with your rabid anti government views would be labeled as such by you