As for previous Iranian media claims that the replica carrier's purpose is that of a "movie prop," the IRGC-N commander dismissed such reports as being "meaningless." 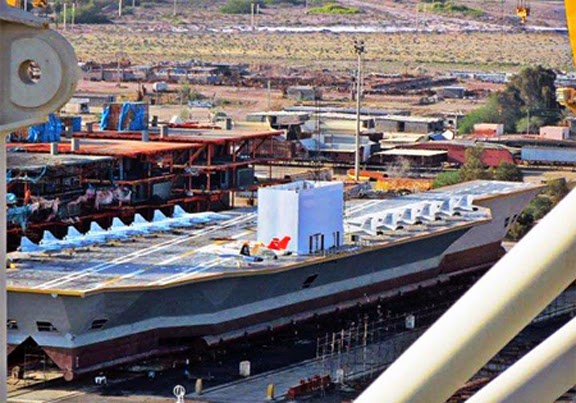 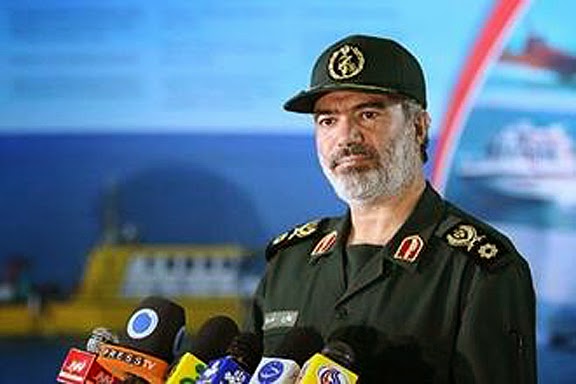 Renderings/photos: Defa Press and Press TV
Posted by Mark Pyruz at 7:25 AM

From their tanks to their stealth fighter plane everything is a mock up in Iran now days.

Reminds me of the Bruce Lee movie and his famous line : "Boards don't hit back"
Replicas don't hit back. US aircraft carriers do and that with a vengeance !

could be that the Iranian military is training because they plan to buy the carrier when the US military mothballs it in a few decades.

then they would have an antique naval vessel to match their air force of US antiques.

Reminds me of USAAC demonstrations (Mitchell and LeMay) against naval targets prior to World War II.

In the current context, the Iranians appear most keen to demonstrate ASBM and ALCM effectiveness against a mock carrier target ship.

it could very well be that Iran missiles are effective against a mock aircraft carrier.

In any war with Iran, U.S carriers will operate in the Arabian Sea, never entering the Persian Gulf. This hinders their capabilities greatly. The U.S simply will not allow one of it's CVN's to come within known missile range.

That isn't what the Pentagon itself has to say about Iran's various anti-ship means able to strike anything in the vicinity of the Persian Gulf and beyond, courtesy of Chinese arms industries and critical technology transfers to Iran during the past decade. A lot of US bases within the region would be sorry ducks as well, and the top brass know that. That's why, among other reasons, we see intensive and lengthy negotiations ongoing over the most contentious nuclear issue rather than all-out confrontation in all classical fashion of American gunboat diplomacy we've seen apply otherwise systematically to every of its foes since 2003. To train troops and test weapons, every armed forces in the world including the US itself proceed in just that very same way : using mock targets over shooting ranges. What else could they do ? risk their soldiers' lives every time they want to train them with real fire ? The purpose of such a mock carrier isn't to assess Iran's survivability against a USN battle group in a total war, but rather merely to sharpen their operators' ability to acquire and attack large surface ships with the weapons at their disposal, and also evaluate the effectiveness of the guidance algorithms incorporated into their anti-ship ballistic missiles' seeker head such as the "Khalij Fars" and its demonstrated pinpoint strike ability against a cruiser-sized target a couple years ago.

AnonymousApril 27, 2014 at 8:48 AM
Agreed,well said.I also wonder if this isnt possibly a test target for a df21 class anti ship ballistic missile perhaps based on one of irans medium ranged missiles like the sejil or qiam

We are the only ones to have successfully targeted and crippled a US warship in 1987. Iran managed to damage a US warship in an indirect way in 1988, when one of them hit a mine. Another interesting thing that few know about is that exocet anti-ship missiles were fired against coalition warships during the 1991 Gulf War, but the French provided the US and UK with a special code which interfered or manipulated the electronics of the missile while it as in flight, making it change trajectory and then self destruct.

Yes, and so by mistaking it for an Iranian warship if I remember correctly, since Iraq by the time not only was not at war with the US, but at the contrary was armed and supported by the latter (among many others, USSR included) and this was particularly true in this phase of its war with Iran. By then the latter Saddam was still "Rumsfeld's son of a bitch". Quite understandably, the crew actually never saw that coming from an Iraqi aircraft which partly explains its lack of defensive action in the first place. So technically, yes : We can indeed say the Iraqi are the only ones having targeted and then successfully fired at a US warship in the region. But in terms of combat performance it amounts to nothing but unexpected behavior by a party considered "friendly" or at least "non-hostile" by another, it can almost be considered as friendly fire in our scenario, which happens all the time in war. To further support that assertion, when the two country were at war and such action was more than appropriate for Iraq not a single such achievement was performed by its air-force, notably because this time every US surface combatant was prepared and in full combat posture.

The video pretty much confirms my thoughts about the unpreparedness of the crew to an Iraqi aircraft suddenly becoming hostile to them rather than simply flying overhead, as one serviceman on the phone told the reporter.


I knew about the Exocet story, though I thought it was related to the sinking of a Royal Navy surface ship by an Argentinean air-force pilot during the Falklands war, correct ?

It was common knowledge for a lot of media outlets back in the day in France where I used to live.

That is true, the Exocet anti-ship missile and its destructive power was first noted during the Falklands war when it was used by the Argentine air force against the British navy task force. The British were quite literally begging the French to stop any further delivery of Exocet missiles after having lost a few ships to that particular weapon, luckily the French heard their cry. Additionally, many British ships in the task force got hit with General Purpose bombs but a majority of the targeted ships got away practically unharmed, except for tiny holes in the hulls where the bombs had punched through, because the bombs did not explode since the ordinance had been released from a very low altitude. Argentine pilots flew just 20 meters above the water to avoid being detected on radar as well as being a harder target to spot for any crew member on deck, briefly pop-up and then strike at the ships. Iron bombs need a certain amount of time to get armed while moving through the air on their way to the target, or else they will fail to explode when they make contact. So theoretically the Argentines should have won that war. On a side note, it is believed that China some way or another obtained the technology that made up the Exocet missile which they put to use in the domestically produced YJ (C-xxx) series of anti-ship missiles.