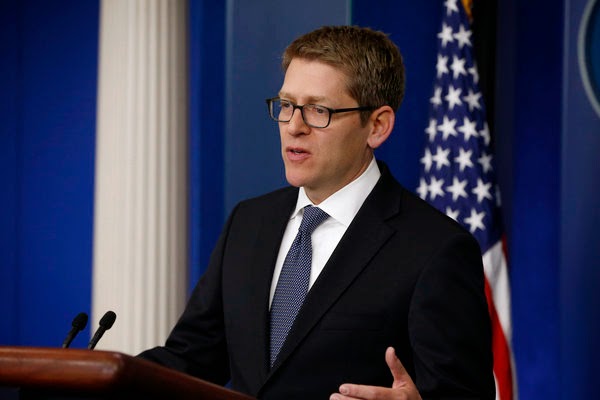 The administration opposes the selection of diplomat Hamid Aboutalebi because of his ties to the student group that took over the U.S. Embassy in Tehran and held 52 American hostages in 1979. The State Department has informed Iranian officials and the U.N. that the U.S. will not issue visa to allow Aboutalebi to take his post in New York.

What can one say? After 35 years of shouting barg bar Amrica we are reduced to a fourth rate nation with a begging bowl asking for her own money and still showing stupidity without any doubt. Shameful for Iran to be reduced to the same level as North Korea, Sudan etc.

US is the arrogant and liar. Iran's ambassador is not a US business to begin with

We can now see that the us was never serious about any improvement in relations.I can almost feel sorry for rouhani and his fellow appeasers,it is a huge blow to their credibility whatever will they do now?,probably try some more appeasement

Since the victory of the Islamic revolution and the formation of the Islamic Republic, hundreds if not thousands of Iranian officials, such as presidents (including ex-presidents Khamenei, Khatami, Ahmadinejad, Rouhani), foreign ministers and other officials, ambassador to the UN, members of the Iranian delegations to the UN, and their staff have been issued visas to visit New York or work at the Iranian mission in the city. When one is refused among all who have received the visas, the question would be why? Well, the short answer is that U.S. does not issue visas to the people who were involved in the takeover of its embassy in Tehran and taking 52 Americans, including its diplomats, hostage for 444 days. Iran made a mistake appointing a diplomat with that kind of background to live and work in New York.

A point missed in many discussions here is that for Iran's own sake the appointment was also wrong. The UN ambassador is a de facto ambassador to the U.S. Many American officials, including senators, state department officials as well as opinion makers, such as academics, analysts and journalists visit the ambassador in his 5th Avenue residence for meetings and discussions of issues of mutual interest all the time. Aboutalebi would have carried such a baggage that meeting him would have been very hard for all those mentioned.

The decisions were made. Iran nominated Aboutalebi and the U.S. refused to issue a visa. Now is the time to move on, and hopefully Rouhani appoints an ambassador with wide appeal in the diplomatic circles and within the U.S., someone with same appeals as Zarif.

Why, because they did not issue a visa to someone they believe was involved in U.S. embassy takeover? Please read my comments at 10:17 PM. I'll be interested to hear you views on it.

He might not be good candidate for any reason but It is not a US business, It is solely a decision related to Iran. If I were Rouhani I insist on this guy (just to make a point) and if US resist on issuing the visa I would suspend Iran's membership on all UN related orgs (including NPT)

Why would Iran need an excuse like this to end its NPT membership? Any country can get out of NPT at any time if and when it chooses so, or from any other UN agencies for that matter. It doesn't need to nominate a person with such background and wait for the visa rejection to get out of any international organization. You just want Iran to build the bomb, and use any excuse to do so, even Aboutalebi's visa; don't you?

you don't get it. It is not to end NPT it is to protest to US aggressive approach toward others. I recently watched some eye opening documentaries (made by Ken Burns) about how America has dealt with American-Indian in 19th century. Basically US ignored any agreement/ treaty as they wished. It is exactly like that. Iran has to do something that has some effect on US calculations. Suspending its membership in all UN related organization is one way.

I think you should read this
http://opiniojuris.org/2014/04/09/can-u-s-deny-irans-new-u-n-ambassador-visa-new-york/

Because they did not issue a visa to a career diplomat that iran had every right to nominate as its un representative in the first place,it certainly doesnt seem like the actions of someone who wants better relations with iran,indeed they seem to be going out of their way to pick a fight on this issue,sadly you seem to believe that the americans are justified in doing this and that iran should put appeasing america ahead of its own sovereignty

I first though it was a mistake by Iran but now I think it is actually smart. Iran is making a diversion. The American side would be on two sides one in Nuclear issue and one on the UN. I think we should be waiting for a 3rd one as well for Inside Iran as the UN case keeps US hawks busy and there is a need for Iran hawks to be busy as well.

Yeah, but like all vain and shallow nations and people you tend to censor real opinions if they don't parrot US official line. LOL

it surely is US business to issue visas or not to persons applying to come to the US.

it's a stupid opinion based on an interpretation of the UN agreement rather than upon the broader body of international law.

Please note that the embassy takeover and taking diplomats hostage violated core principles of UN's Vienna Convention. No matter how you see it, from the American point of view or the UN's, this was a mistake on part of the Iranians to nominate this gentleman to the post. I don't think many diplomats in the UN would be sympathetic to what he is alleged of doing.

This man should be issued a visa and on arrival should be taken for questioning by US authorities.