Hostages Were Freed at Iran-Afghanistan Border 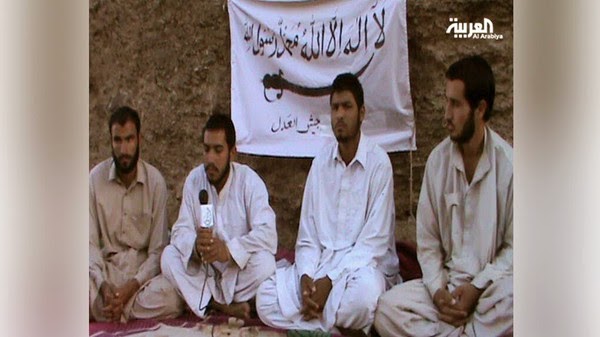 Iran’s semi-official Fars news Agency reported that the Baluch militant group Jaish ul-Adl has freed Iranian border guards today and handed them to Iranian authorities. The group took five guards hostage in February, but said it executed one of them, and threatened to execute the rest if Iran did not free all imprisoned Baluch militants.

It was not clear if Iran accepted Jaish ul-Adl demands and freed any prisoners. The Iranian authorities said last month they were negotiating with the militants, without disclosing any details, to free NAJA border guards.

Fars News Agency named the freed guards as Ramin Hazrati, Sajad Zahani, Mohammad Nezami and Jamshid Taimouri. Jamshid Danayeefar, the fifth guard who was kidnapped, was executed by the group in March. Fars did not say if Danayeefar’s body was delivered to Iranian authorities.

Abdol Raoof Rigi, a spokesman for the group, told reporters that Jaish ul-Adl would return Danayeefar’s body if the Iranians return the bodies of Baluch militants executed in Iran.  Abdol Raoof is the brother of Abdol Malik Rigi, the leader of Jundallah who was kidnapped by Iranian agents and later executed in Iran.

UPDATE II: The four freed guards were handed over to the Iranian authorities at Iran-Afghanistan border in Afghan Baluchistan, Nimrooz province, and were taken to Zabol, the nearest Iranian city. (Al Arabiya, 4 April)

Photo credit: The four NAJA border guards shown moments before being freed, being “interviewed” by Adl Network of Jaish ul-Adl; 4 April 2014 (Al Arabiya)
Posted by Nader Uskowi at 7:55 AM

There are just over 2.2 Mil. Iranian of Balouchi origin in Iran... Half are women (plus minus)... Remains over a Million.. Of which 40% are over 60 years of age.. Remains little over half a million.. Of which over 45% live scattered throughout Iran in different cities like all other Iranian... Remains around 270 000 of which 30% are Shia and that leaves just under 190 000 for a classic grid-manhunt.

Do you really think Iran would not know who is responsible, (for this atrocities) had they been Iranians ??? These animals are of Pakistani origins and that explains their lack of compassion for an Iranian border guard doing his 2 years like the rest of us..

I think Iranian do not need lessons in what is right and wrong with regards to terrorists.. Afterall they have been successful in eliminating and pacifying all of them so far and this new one is no different..

Actually the government's handling of this hostage situation proved to be very effective, but not expected when Jaish ul-Adl took the guards hostage in February. It was then believed that Iran would use IRGC Special Forces, the Saberin, and other IRGC ground forces elements, for a search and rescue operation inside Pakistan. But the government instead negotiated with Jaish ul-Adl and freed the hostages without any military intrusion inside Pakistan. Not sure what price it had to pay or how many militant Baluch prisoners it had to free, but nonetheless very effective and indeed bold tactic on part of the government to free the hostages. Their families must be very happy. And our hearts go to Danayeefar's family who lost a young man who must have been very proud of his service as a border guard.

Let's face the situation realistically. Baluchistan is one of the most underdeveloped areas of the country, subjected to discriminatory policies by the central government on basis of ethnicity, language and religion; a situation ripe for dissent, resurrection and terrorism. The government must have a plan to deal with Baluch situation, basically an economic development campaign and reversing the discriminatory policies. I am certain the current government will not get distracted by or pay attention to types of "analysis" that idetifies insurgents as non-Iranian, saying in effect this was not an internal problem for the country, and probably no needs to take determined actions to change the situation and the atmosphere in Baluchistan.

If they give in to terrorists demands this situation will happen again.

Law enforcement should do its job. Buy how about starting a campaign of development and anti-discrimination in Baluchistan to resolve the root caused of the problem?

development comes after security. If those people stop being security treat development will follow. Specially with the new trend of developing chabahar port.

Are you saying "these people" are inherently security threats? Don't you believe this is not a wise thing to say, indeed it belittle the entire Baluch people.? A look at restless regions in Iran show lack of development and discrimination against its people based on ethnicity, language and religion.

Both approaches to the problem should go hand-in-hand. Law enforcement efforts to provide security needed for development, and concerted and special efforts to develop the region and end discrimination as the surest way to uproot causes of unrest, insurgency and terrorism.

Iranian military, diplomatic and political pressure on Pakistan worked this time. The reason Nawaz Sharif, a Saudi puppet suddenly showed up in Tehran and the next day the border guards were released speaks volumes about the Pakistani government's complicity in the abduction. But this time the ISI knew that Iran was serious and would take military action if necessary and secondly there are over 30% Shia in Pakistan and they are not happy with the Wahhabi terrorist networks that the ISI controls with Saudi funding. Over 10,000 Pakistani Shia, mostly intellectuals and professionals have lost their lives in the past five years to the random and targeted Wahabbi terrorist attacks. Lately, the Shia have begun to fight back and settled scores, particularly in Karachi and Punjab.

It is now imperative that Iran keeps up strict border security and increase intelligence gathering in the imploding Pakistani controlled part of Baluchistan where a full blown insurgency against the failed state in in the works.

probably another sensless logic put out by Uskowi. Let us blame everyone else except Baluchis! Look noone owes anybody any living. Iran is a big country. I am sure thosae who want to work and propser can find work everywhere. There are two million afghans in Iran as refugees and work in construction. Are you telling us these people cannot do what afghanis do? Your logic is flawed!

Good luck in resolving the country's problems with such approach! Deflect all criticism from the government by blaming everyone but the government, and I wonder why.

I have no inclination towards this government and I resent them. However, I don't think they can be blamed for every misfortune. are you implying that other minorities in Iran are having good time bar baluchis? How about bakhtiari, toorkmen and others? how often they go around and kill border guards and others? I think one must be a fool to believe that nonsense. There is no justification for terrorism. Full stop. Talk of deprived opportunities is meaningless.

Meaningless in your parallel world perhaps. In real world the two issues could and should go hand-in-hand: Law enforcement to maintain the security of the region, such as fighting terrorism in this case, and development campaigns to answer the root causes of insurgencies or terrorism. It that too much to do simultaneously?

BTW, why can't we discuss a specific issue under discussion, like the Baluch situation here on this post, without speaking about all other minorities in Iran, and perhaps in the world? Their situation in Iran is very similar to the Baluch, if that's what you wanted to know.

I do agree that discrimination is a (a, not the) root cause after everything the regime did in minority provinces. But do the Baluch really need an excuse? I mean didn't they help Saddam Hussein during the 8 year long war with Iraq? What could justify that?

Also, by negotiating with this Jaish-ul-adl, the government is indeed encouraging more terrorist actions on their part. We don't know what happened yet but we do know that one guard was killed, so "negotiating" is shameful.

I think this might have something to do with the IRGC's taking over border security with Pakistan. Maybe it scared them off? I sure hope so.

Iran is surrounded by failed, third world countries. Border security should have become an IRGC job decades ago.

I think most of the above comments, (sorry Mr Uskowi yours too) over simplifications. Given that the Baluch, like Kurdish nationals consider themselves not part of Iran and occupied, just like the Pakistani baluch, and afghani baluch do since the 19th century when Persia and colonial British India began exerting authority of te Baluch. In Irans case the Qajars were too weak and Baluchistan had its own self proclaimed leaders that couldnt be subdued until the Pahlavis solidified central rule over them. Thus discrimination has been occuring againts the baluchis for centuries (probably since Nader shah's time). Thus separatist/Nationalist sentiments have been around for a while.
Mr Uskowi's comments somehow seem to imply that discrimination is something that started after 1979
The fact that the Baluchis speak their own dialect also, and have very dark skin (think south indian) didnt make discrimination much better, given that the notion was promoted by the Pahlavi dynasty that Iranians are somehow White, Aryan, European. Whether we like to admit it or not we do tend to be quite racist as a society and that exacerbates the situation a lot too.

I doubt the Pakistanis were behind this. They have a much much larger conflict with Baluchi separatists and about 6,000 pakistani civilians and miltary personel were killed in their conflict with the "Baluchistan Liberation Front" and "Baluch National movement".

While the Rigi's often hid in Pakistan to hide from authorities and to receive funding from Foreign governments his education is from a Saudi funded Salafist school that much of the Taliban attended as well. Its more likley the Saudis, the Taliban and other miltant groups helped train him.
http://web.archive.org/web/20100919100726/http://www.dawn.com/wps/wcm/connect/dawn-content-library/dawn/the-newspaper/front-page/12-rigis-arrest-a-godsend-for-pakistan-420--bi-01

Right Nader but saying this is all internal and resulting from discrimination isnt the whole picture either. Both Jundullah and Jaish ul-adl even in the Forein media coverage of this are mentioned to be al-Qaeda linked groups.
Secondly Seymor Hersh revealed back in 2008 that the US Gov got congressional approval under Bush to fund 400 million for exactly these types of groups to in their words "destabilize" the Iranian government.

Furthermore in the mainstream Political science journal "Foreign Policy" reported the Isrealis were doing this
http://www.foreignpolicy.com/articles/2012/01/13/false_flag

as well as the New Yorker both stated it wasnt just the Israelis
http://www.newyorker.com/reporting/2008/07/07/080707fa_fact_hersh

On 2 April 2007, Abdolmalek Rigi appeared on the Persian service of Voice of America, the official broadcasting service of the United States government, which identified Rigi as "the leader of popular Iranian resistance movement" and used the title of "Doctor" with his name.

It was never Pakistan. The who deal and abductions took in Iran.

Yes and Pakistan helped in Rigis capturing. Besides reports are that they wre never taken into Pakistan. The whol domain was Iran afghan border.

It is a shame that one of the young border guards had to die at the terrorists hands. RIP.