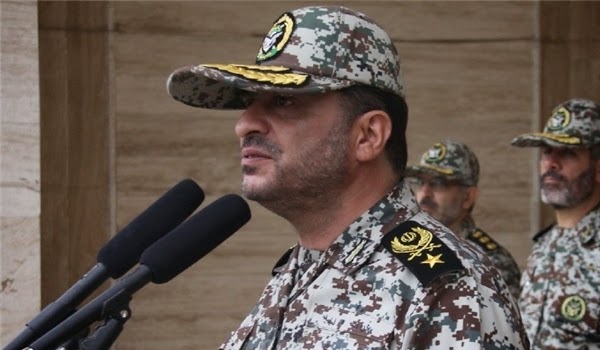 Lieutenant Commander of Iran’s Khatam al-Anbia Air Defense Base Brig. Gen. Alireza Sabahifard said in Tehran today that two “massive” air defense drills in the Iranian calendar year 1392 (which ended on 20 March) were so effective that they changed the “behavior of the enemy in the region.” (Fars News Agency, 6 April)

Gen. Sabahifard did not elaborate whose behavior did it actually change, and how those drills changed the “behavior of enemies” in the region.

Hopefully the west will get to test these in about four months.

Iran's air defenses are totally adequate if Iran is dealing with the Somali pirates.

against the air force of a nation equipped with up-to-date aircraft, Iran's defenses are of little use and will be stripped away and rendered entirely useless within a week or two.

I only became convinced of Iran's advanced air defense capabilities after the development of Talaash air defense system (the one that looks like the U.S Patriot missile). It is clear that Iran has shifted the priority to air-defense after it has achieved a ballistic missile deterrence. Next thing in their agenda must be fighter jets.

After all, what good are the best fighter jets if you can't protect your air bases?

I do not agree with your assessment. The air defense system being developed, as described by Gen. Sabahifar, is indeed a very sophisticated and advanced system. When the Russians refused to sell their S-300 system to Iran, the Iranians began to develop their own, as sophisticated as any system.

Somali pirates don't have any aircraft...how clever of you!

The Iranian air defense has the ability to deal some damage to any aggressor, but would be hit all over, no doubt. A wise thing would be if they had exercised the options offered to them by friendly countries years ago, before the enactment of the hardest sanctions by the US. There was ample time and opportunity to procure new fighter jets from either Russia or China, such as SU-30 and J-10. Even France offered to refurbish and upgrade their Mirage F1s to the same standard as the ones serving in the French Air Force... the Iranians turned them down. The Iranian regime is on a long winding path of self-suffiency. It's gonna take forever to test and field a fourth generation combat aircraft because of all the restrictions in co-operation and partnership with foreign companies.

And Russians could do, in Ukraine, whatever they wanted, despite 'promises' of nations with 'up-to date' equipped AIR FORCE NATIONs.

Does another side is so sure that their air bases will be protected better ..... ??

I fully adhere to that assertion, and that systematic tendency to gratuitously belittle and denigrate every single Iranian technological achievement by some people on the sole basis that they dislike the regime is really sad to witness. Scientific advancement is one thing, and political backwardness is another, one should do every effort not to mix those two separate axis of discussion.

As for the core topic discussed here : there is plenty of open source analysis and documentation available in many places of the internet in specialized literature, where many renowned individuals from defense establishments of various countries, notably including former Pentagon head Leon Panetta and Uzi Rubin, father of Israel's ABM projects, whose assessment of Iran's growing air defense capabilities and ballistic arsenal degree of accuracy have drastically grown over the past decade, where the bulk of Iranian defense project began to bear fruit after years of difficult, uphill struggle mainly related to their once relatively small hence weak military R&D infrastructure and engineering experience.

Today Iranian air defenses have grown way beyond their once limited and semi-analog, legacy nature inherited from captured Iraqi equipment and Shah-era remnants of mid-range Hawk systems. If we consider every system they publicly unveiled since the mid-2000s we can consider they cover all ranges from very low to middle range for fixed-wing and rotary-wing aircraft , drones and cruise missiles, via system named Ya Zahra (FM-80/90 derivatives) , and fighter sized targets in the mid-range, "Ra'ad" and "Mersad" air defense systems (respectively derived of I-Hawk on which DIO has ample experience and knowledge, and Buk-M2 systems that Iran received most likely clandestinely), and the middle to long range with their recently unveiled "Sayyad-2" (obviously influenced from various american systems like the SM-1/2 of which it has long been speculated over the years that Iran's specialists have been working hard to comprehend the core design since the end of the Iran-Iraq war).

The final missing piece of that net, the long and very long range interception scope, will be added to IRIADF inventory in some time, once their "Bavar-373" system, the closest thing one can find to Russia's S-300 in Iran, and probably the result of extensive work on S-300 hundred batteries obtained by Iran a few years ago via a shipment from Belarus if I remember correctly.

These people should first learn how to defend the borders against third rate terrorists. Oh wait a minute,they are the terrorists !

In reality as Nader mentioned, Iranian airdefence is quite advanved and very dense now with over 15 different systems ranging from S-200 upgrades, moderinzed HAWKS, TOR1, Pantsir SI, Crotale (Chinese version which is better and more recent), Rapier, Tigercat, SA-6, Sayyed 1 and 2 and various other MANPADS. Iran is improving military ties with Pakistan too which has offered to upgrade the Mirages and sell JF-17 to Iran. There is a joint airforce exercise planned over Sistan with PAF F-16 and IRIAF F14-A to try compatibility of systems and interception techniques. A large Pakistani naval armada is in Bandar Abbas this week.

Dubai-Persian Gulf. The navies of Iran and Pakistan plan to hold joint military exercises in the eastern part of the Strait of Hormuz on Tuesday, Iran's state news agency said on Sunday.

Several Pakistani naval vessels, including a warship and a submarine, docked at the Iranian port of Bandar Abbas on Saturday, the IRNA news agency said, citing an Iranian Navy statement.

"The most important activity of the Pakistani fleet during its stay in Bandar Abbas is to launch joint maneuvers with selected units of Iran's Navy in eastern waters of the Hormuz Strait," Iranian Rear Admiral Shahram Irani told IRNA.

Iran's state news agency said the joint naval exercises were aimed at promoting military cooperation between Tehran and Islamabad but gave no details of the plans which include airforce and army exercises as well.

More than a third of the world's sea borne oil exports pass through the Strait of Hormuz, a narrow corridor between Iran and Oman. Western navies, led by the United States, patrol the region to ensure their safe passage. Iran naval presence has been strengthened in this vital region and its military has enhanced cooperation with Pakistan and Oman.


Wishin' and hopin' and thinkin' and prayin'
Plannin' and dreamin'

ain't of use against real aircraft..... and the theocrats don't exactly tell the truth.....