Calls for Separation Between Political and Religious Work 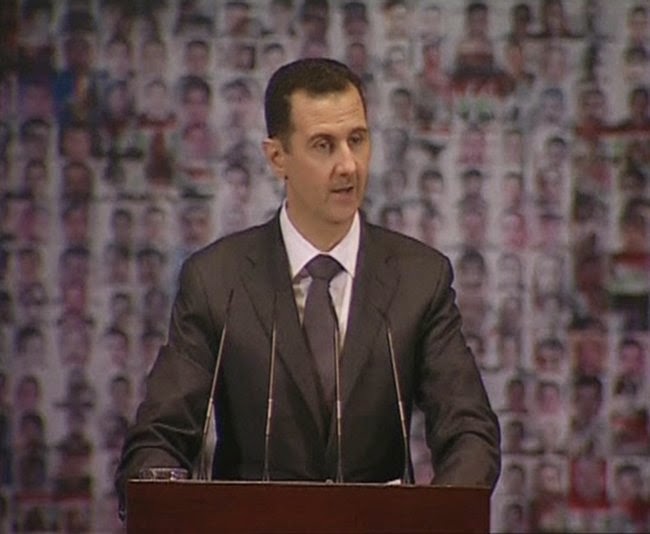 “The project of political Islam has failed, and there should be no mixing between political and religious work,” Assad said during a ceremony commemorating 67th anniversary of the founding of ruling Baath party.

Strange coming from a man that has just been saved by the Islamic theocracy in Iran ("political Islam"). But I agree,the project of political Islam has failed as graphically proven by thirty five years of barbaric rule in Iran.

Iran did not support Syria for any altruistic or religious reasons, it was sheer real-politik and any government would have done that considering the Saudi Wahhabi existential treat to Iran. It is also a great credit to President Assad and his steadfast resolve in defeating the terrorist threat with patience and fortitude. A Wahhabi takeover of Syria would have been a disaster for the whole region and the specter of terrorism would have spread all over the region and as far as Russia and India. Iran's goal was to keep its allies in Hezbollah and Syria secure. In any case, President Assad has weathered the crises as most of us who live in the real world knew from day one. The Syrian Arab Army has come out of this unfortunate conflict as the most cohesive and battle tested after the Iranian army.

This maintains Syria's established political position but also aligns it with the reestablished Egyptian regime and the Turkish opposition.

The continuity of Iran's alliance with Syria has been maintained as a resistance bloc against Zionism and "extra-regional hegemonic powers."

To put this in American terms in a seemingly odd alliance pairing, our alliance with a state lacking representative rule and even a constitution can be found in Saudi Arabia.

Assad and the Baathists do indeed look progressive as compared to the Islamic Republic on this issue, and that’s because the regime in Tehran, in the 21st century, is based on the supreme rule of a Shia cleric getting its legitimacy from the Heavens.

But as Mark pointed out, political realism at times trumps even the religion, with Tehran supporting a secular government in Syria against an opposition composed mainly of religious groups! But inside Iran, secular activists can go to prison because of their beliefs. This is also the surrealism of it all.

as if assad regime is secular, its been sectarian longer then Iran has been under the ayatollahs but under a guise lol syria is pretty much run by Iran with Iranian forces of IRGC, shia millitias & hezbollah dawrfing assads control & power since his biggest asset the NDF is under irans control, iran has said it sees syria as a province, as if assad has any power to force these forces Out, iran was always worried about the regime switching sides previously no longer

Irans Khomeini is simply a sectarian monster nothing else

Nader UskowiApril 8, 2014 at 7:24 AM
When one is fighting a war of resistance for ones very survival against an aggressive predatory global hegemon,one takes ones allies where one can find them and is greatful for it,if iran has to choose between supporting an allied progressive secular government versus a failed state run by medieval sunni wahabists,well its pretty clear what anyone with half a brain would do,but then again maybe you honestly cant tell the difference between the iri and wahabist islam

Yes the mullahs have lined their pockets very well.