Khamenei Calls for Substantial Concessions by P5+1 in Nuclear Talks

‘A Test of Western Sincerity’ 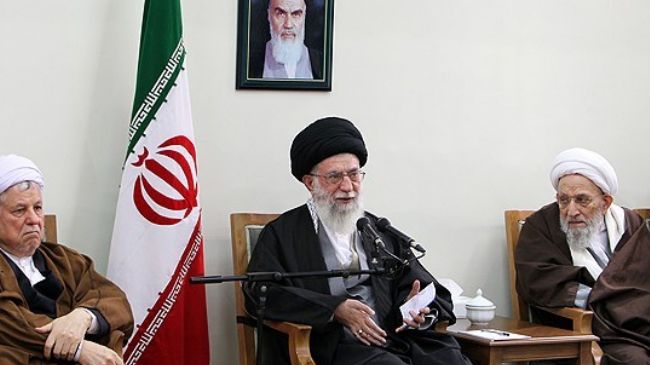 Iran’s Supreme Leader Ayatollah Ali Khamenei said today the next round of nuclear negotiations between Iran and the P5+1 group will be “a test of Western sincerity.” Khamenei added that the West failed to offer any concessions during the latest talks in Almaty in February.

“The Westerners did not do any substantial work that could be interpreted as concessions,” said Khamenei. “They, minimally, admitted part of (the) rights of the Iranian nation, only.” But Khamenei added “Iran will judge intentions of the West in the next talks.” (IRINN, 7 March).

the Iranian government had hailed the Almaty talks as a victory for the country. Iran’s nuclear negotiator Saeed Jalili had called “a turning point” that showed the West was willing to compromise on Tehran's uranium enrichment program.

Ayatollah Khamenei made his remarks at a meeting with Iran’s Assembly of Experts in Tehran. Former president Ali Akbar Hashemi Rafsanjani and the Assembly chairman Ayatollah Mahdavi Kani were sitting next to Khamenei during the meeting (photo).

What does this parasite know about being sincere?
The regime was created through insincerity.

"The Iranian government had hailed the Almaty talks as a victory for the country. "

That's too sweeping a comment, as the Islamic Republic of Iran's political environment is not monolithic, as Khamenei's remark further demonstrates.

All in all, though, Khamenei's remarks are far less incendiary than what's been coming out of the Obama administration during the AIPAC rally.

It was Iran’s foreign minister speaking as spokesman for the country who said Almaty talks were a victory for the Iranian people, and a number of commentators on this blog echoed that sentiment. The AIPAC conference happened after the Almaty Talks. Are you saying that the analysis offered by Khamenei of what happened in Almaty could be colored by events since the talks ended?

I think it is related to the tune of US, and also perhaps Khameneie is not satisfied with what west is offering. He has the last word and he is sending a message to the west that he is not satisfied.

By the tone of the US you are probably referring to what was said by U.S. officials after Almaty. How could that tone changes what actually happened in Almaty?

No After Almaty they (Biden and Kerry) start threatening Iran (and also Europe and Amano) . I am saying it might have a factor. Also Khamenie is perhaps not impressed with the details of the proposal after reading it carefully but I think we have to see what they are going to suggest in exchange of the proposal. Even if I remember correctly, Jalili after the Almati said the proposal is too small and Iran's answer will be proportional. Another thing is Khamenie will try to look unimpressed and tough before any serious offer (just like when you want to buy a house you don't show that you're really interested but you should look uninterested so the seller give you a better price)

And I am not sure if anything constructive will ever happens in these negotiations, as it seems that some in US government are not satisfied unless "Iran is brought to its Knees" As evident in recent Senate hearing where CENTCOM General was testifying.

I agree, this attitude will kill the negotiations. If west want a win-lose solution Iran will make it lose-lose solution. Both sides has the option to get a win-win solution out of this situation but they should be realistic and don't try to force the other side into submission.

perhaps that wouldn't bring immediate Western concessions, but it would still be a pleasant and worthwhile gesture of good faith.

You lollipop children don't seem to grasp the obvious without adult supervision. THE TALKS WILL FAIL AS LONG AS THE ZIONISTS CONTROL US. The whole Iran issue has nothing to do with nukes, but everything with perpetuating Zionist hegemony in the region. There are many more decades of regional conflict ahead as the deadbeat US plays its swan song, so buy a truckload of lollipops and keep playing x-box and maintain posting enhanced crappola.LOL.

Are you saying Iran’s foreign minister and other officials who have said the talks in Almaty were victory for Iran and expect positive results in next rounds of talks (which on that part includes Khamenei) do not understand the “Zionist” factor and are all wrong? And only you know what happened in Almaty and will happen there again in April? BTW, what is about your continued fascination with lollipops?

Mahdavi Kani looks to be in rough shape and not know where he is. And Rafsanjani looks like he is about to cry. But seriously, can't the assembley influence the leader to accept the offer? I don't understand what the big deal is.. you get to enrich up to 3.5 and keep frodo open in exhange for removal of sanctions and in a couple of years you have built enough confidence to increase higher grade andbproduction and no one would care.