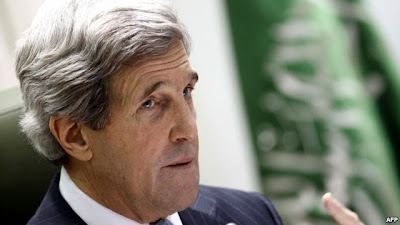 “He will be very direct with Prime Minister Maliki about the importance of stopping the Iranian overflights and the transits across the territory or, at a minimum, inspecting each of the flights,” the U.S. official said. (Reuters, 24 March)
Kerry also plans to speak by phone with Kurdish leader Massoud Barzani. The U.S. is concerned that Kurdish regional government’s plans to press ahead with the construction of an oil pipeline to Turkey could lead to the break-up of Iraq.

“Kerry will stress the importance of maintaining the unity of Iraq,” said a U.S. official. “Separate efforts undercut the unity of the country.” (AP, 24 march)

Looks like the US/Zionist axis of evil is not having a very good day in Iraq according to the Debka lonely gossiping Zionist ladies:

US Secretary of State John Kerry, on an announced visit to Baghdad Sunday, was unable to persuade Iraqi Prime Minister Nuri al-Maliki cut short the Iranian airlift and land route to Bashar Assad of weapons, fighters and cash.

Looks like the US/NATO created FSA terrorists are falling apart two as their political "leadership" has resigned and most of the Salafi-Wahabbi terrorist thugs have been killed by the resolute Syrian military. According to Zionists, Russian, Chinese and Iranian supplies are what keep Assad’s army on the offensive and his regime in Damascus stable and that now has total control over other Syrian towns and is easily able to survive the rebellion. This has long been an issue of contention between Washington and Baghdad and now Iraq has thrown its weight behind its Shia cousins in the region.

He (Kerry) wants Iraq to prevent Iran's flights to Syria and on the other hand they (the West) train and supply terrorists in Syria with weapons, which used to kill civilians and even murder innocent peoples inside the mosques.

These are examples of double standard policies, which are conveyed by "authors" with their proxies on this blog..

NATO’s cyberwarfare center says cyber attacks launched against the Islamic Republic of Iran by the US and Israel constituted “an act of force” and were illegal under international law.

According to The Tallinn Manual on the International Law Applicable to Cyber Warfare, commissioned by NATO’s Cooperative Cyber Defense Center of Excellence in Estonia, “Acts that kill or injure persons or destroy or damage objects are unambiguously uses of force,” The Washington Times reported on Sunday.

Michael D. Schmitt, the manual’s lead author and professor of international law at the US Naval War College in Newport, said the group of researchers who wrote the manual all agreed that the use of Stuxnet virus, that attacked Iran’s cyber structures in 2009, was an act of force.

This guy is a failure. He's worse than Hilary. At least Hilary had charisma. This Zio-licker is so bent on pleasing the masters that he quickly becomes irrelevant. How could he ask the Iraqis to stop something that his government is doing? At least Iraq could say it is supporting a legitimate government, what could he say?
I am really bemoaning the golden era of American diplomacy in 40s to 70's. Nowadays, they seem to produce just shit-filled heads chicken drops diplomats!