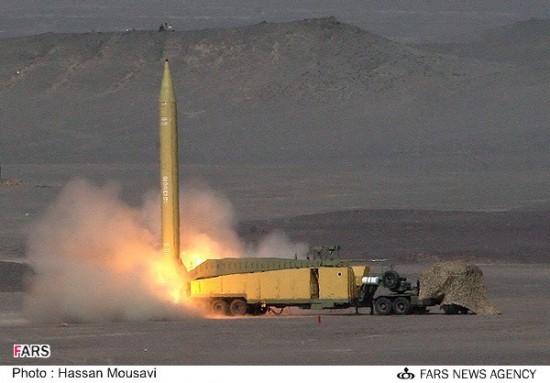 Days after Iran hailed the Almaty talks with P5+1, state-run news agencies and Press TV report that Iran was ready to “drop thousands of long-range missiles” on enemies in case of an invasion.

“We are waiting for an order by the Leader of the Islamic Revolution [Ayatollah Khamenei] to drop thousands of long-range missiles on enemies who have the evil thought of an invasion,” said Brig. Gen. Ali Shadmani, Deputy Chief of the Operations of the Iranian Armed Forces. (Press TV, 1 March)

“The enemies, equipped with advanced weaponry, seek an opportunity to carry out an act of aggression, but they even fear the idea of an invasion,” Gen. Shadmani added.

Also on Thursday, IRGC Deputy Commander Brig. Gen. Hossein Salami praised Iran’s achievements in its defensive capabilities and said the Islamic Republic was prepared to respond to “any power.” Gen. Salami added that sanctions, threats, and economic war could not undermine Iran’s determination.

Note: The Almaty talks on Iran’s nuclear program were seen by many as diplomatic victory for both Iran and P5+1, paving the way for further negotiations in the next two months. And although a comprehensive settlement to the decade-old dispute might not be in sight yet, but reaching a first agreement between the two sides in more than eight years is seen as a distinct possibility during the next round of talks in Almaty in April. Talks of war, however, are constant reminders on how precarious diplomatic developments remain.

I will forward your comments to Press TV.

Mark, changed the photo, thanks for the note.

The missiles are useless against the real enemies of the Rapist Theocracy,namely the Iranian people.

Last year, it was reportedly that IRAN was among the top ten in the fields of missile and space technologies in the world.

Report by who? The Iranian Government??? BAHAHAHA!!!!

Its also been "reported" that mat has forgotten his medication.

Must see documentary of Hassan Bagheri, one of Iran's best commanders during the Imposed war 1980-1988. (featuring real footage, used extensively throughout).

dear mat--- not in THIS world.

Several years ago, Theodore Postol from the Massachusset Institute of Technlology attempted to make detailed analysis of Iranian missiles' parameters, using available videos from their launches...

That is the reason that some of the people around, would like to see detailed and numerous videos of the newest Iranian missiles during their flights...

And they use to complain about those videos...

no one forces the Iranian govt and propaganda outlets to trumpet missile launches.... and the dishonest crap that they publish isn't disinformation to deceive the Western world, but to deceive the iranian public.

the West is perfectly capable of making their own recordings of Iran's missile launches...and does...and uses that for analysis rather than the untrustworthy ...and often ludicrous films and claims from the regime.

don't be so silly in your own claims.