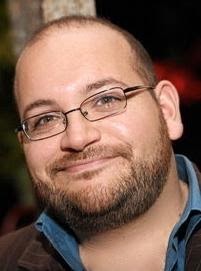 Iran said today that Iranian-American journalist, Jason Rezaian, has been charged after appearing in the court on Saturday. The Iranian Judiciary did not disclose the nature of the charges against him. Rezaian, the Washington Post’s bureau chief in Tehran, has been held in the notorious Evin prison for more than four months. (AP, 6 December)

took the swine four months to figure out what charge to manufacture?

Well, I suppose this qualifies as judicial movement.of the case.

On a positive note, Iranian-Canadian blogger "Hoder" was recently pardoned by SL/IRIG.

The judge did not allow Rezaian's lawyer in the court, and denied Rezaian's request to be released on bail. The Rezaian's family are also saying that Jason is under physical and psychological distress, and is not receiving proper medical care.

Islamic justice system is a disaster! Sharia has devoured the Iranian people! Iran is a terribly sick country! Iranian regime respects no international law, only the stuff that comes from Sharia is recognized! The mullahs run Iran with an iron grip! Even lawyers get punished for doing their job! Evin prison is a horrific complex where torture is daily routine! Evin is filled with lawyers and other innocent people! Iran is an acidic pit...a place almost nobody wishes to live in! Many Iranians try to escape to another country, where they can live a life but so many of them find it difficult to leave due to various reasons! Right now tens of thousands would leave as quickly as possible if they were offered a chance, an easy way out! Only the brainwashed minions of the regime are happy to stay in that hopeless pit and those poor ones who got no options!