After Maliki Blames Kurds for Advances by ‘Islamic State’ 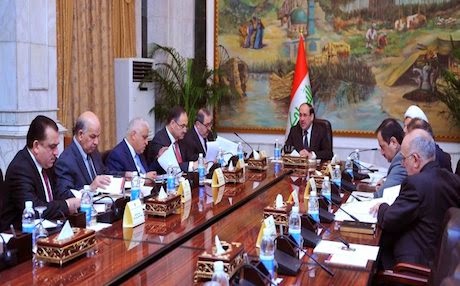 The Kurds today announced that they will boycott Iraqi cabinet meetings and called on Prime Minister Nouri al-Maliki to step down after Maliki accused the Kurds of harboring the “Islamic State” militants who have overrun much of the country. The prime minister provided no evidence, and the Kurds denied the allegations.

Deputy Prime Minister Roz Nouri Shawez, the highest-level Kurdish official in the government, told reporters Thursday “such statements (by Maliki) are meant to hide the big security fiasco by blaming others, and we announce our boycott of Cabinet meetings.” (AP, 10 July)

Kurds also hold the Cabinet posts for foreign affairs, trade, health and immigration and displacement.
The move underlines the deepening split between al-Maliki and the Kurds.

“He is doing everything he can to justify his failures and put the blame on others for these failures,” the Kurdish presidency said in a statement posted on its website late Wednesday. It accused Maliki of destroying the country, and demanded that he steps down. (AP, 10 July)

Maliki’s rivals and some former allies accuse the prime minister of helping fuel the current crisis by failing to promote reconciliation with the country's minority Sunnis.

File Photo: Iraqi Cabinet Meeting chaired by Maliki in May 2014. (PMO.iq/rudaw.net)
Posted by Nader Uskowi at 7:44 AM

Important to add, the Maliki government and its allies assert the Kurds to be involved in a military-security conspiracy that set up the military failure of the 2014 Northern Iraq Offensive. The evidence they provide is the ethnic composition of Iraq's disintegrated 2nd Division as well the overt, seemingly pre-planned nature of Kurdish opportunism in seizing Kirkuk.

Should the Baghdad government acquire the resources and wherewithal, it is not inconceivable they would seek to launch counteroffensives in the directions of both west ("Islamic State") and north (Kurdistan).

Maliki will use all types of excuses to cover the collapse of the army divisions without firing a shot. Four Iraqi Army divisions (and not just the 2nd division) and two national police divisions, all part of the ISF, collapsed last month. Now the Kurds are convenient excuse for him: he can "explain" away his military defeat in the hands of then-ISIL, and he can hit back at the Kurds for their desire of autonomy and independence.

Iraqi reactionary forces, starting with Saddam, have always wanted to "crush" the Kurds. Instead they need to coopt them in a real power-sharing arrangement. Right now Erbil is a much more organized and pleasant place that Baghdad. These types of threats against the Kurds is not working and should be stopped.

The more important matter is how to divide Iraq.
Artificial and hypocritical claims for " a unity " are a waste of time.

Iraq needs an UN conference on division of Iraq and Syria, and they can look for procedures of separation of the he Czeh and Slovakia republics, especially after the US statements that it will not object to Kurdish referendum for independence.

What about kirkuk tho? Who gets that

Kurdish leaders have made many mistakes in their lives throughout history and time will show if this is not yet another one...and of course it will not be the leaders who pay the price but the poor Kurdish people. Turkey has a deal with the West in which if Turkey recognizes the Kurds in Iraq and harmonizes their situations in Turkey, the entrance into EU and lowering of tariffs with regards to export and import of goods to US/Canada and EU will be smooth and secured. Turkey is also looking for getting nuclear technology in a quicker way from the West and is also looking into getting more lucrative supplier contracts from the US military industry. Erdogan hopes the economic wins will make the people satisfied and they will no longer recall Turkish nationalism. He might be correct on that, but time will show what will happen inside Turkey when an independent Kurdish state is created in Iraq.
As per Iran it wish the Kurds "good luck" on their way to independence which Iran is not recommending them for the moment due to dynamics in the region. Iran has made clear that the Iran-Iraq-Syria corridor should be respected no matter what happens. Right now the Kurds in Syria has a defacto autonomous region in that country and they look forward to join their Iraqi Kurdish brothers. Exactly as ISIS is creating a Iraq-Syria Sunni nation, they look forward to a union of Syrian and Iraqi Kurdistan. This will put more pressure on Turkey which has Kurds alongside the entire border with both Iraq and Syria.
But please don't doubt who "closed his eyes" when the ISIS was preparing for an attack and during the advancement. I am sure those who did will soon pay a big price for harboring and directly/indirectly helping terrorists as many innocent lives have been lost.

Maliki would claim that it was winged monkeys and white rabbits responsible for his own failures and those of his army.

when Pyruz speculates about Maliki acquiring military resources, I assume he means Iranian equipment, advisors and those Shi'a thug militias that Iran so dearly loves to form. Let them try attacking the Kurds. and the Iranians will get very bloody and there'll be many lovely martyrdom notices in the newspapers.

the Kurds will have no difficulty in acquiring arms more sophisticated than those that Iran can supply.

the Kurds have it and they're keeping it.

" Iran has made clear that the Iran-Iraq-Syria corridor should be respected no matter what happens. "

Iran's desires don't count for all that much and the corridor's traffic is not secure from attack.