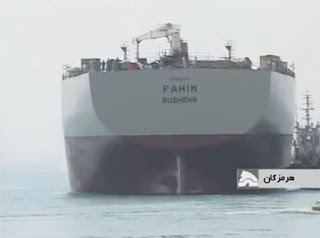 IRIS Fahim being moved to an outfitting dock for completion

The tanker, manufactured by Iran Shipbuilding and Offshore Industries Complex Co. (ISOICO), was launched on Sunday in the southern port city of Bandar Abbas.

In one of its latest shipbuilding projects, Iran delivered the first Aframax tanker made for the Venezuelan national oil company, PDVSA, in October 2012. 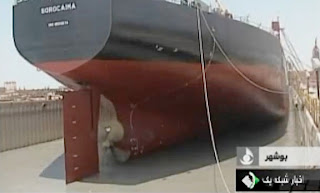 Sorocaima built for Venezuela by the Islamic Republic of Iran

Video (Persian)
Posted by Mark Pyruz at 2:48 AM

It is obviously fake. Made of plastic. Can't actually float. More IRI propaganda.

As usual, Iran media's reporting contains inaccuracies. IRIS Fahim is not on it's maiden voyage in the Persian Gulf. Rather, it's been put to water, appears to have passed buoyancy tests and now proceeds to an outfitting dock for completion.

I wonder why Iran is not manufacturing a helicopter assault ship that is of similar tonnage?

But those who pretend to be blind to Iran's single-handed progress are really the most biased and spiteful lot. Why, where would Iran be now if Shah were still on the throne?I do not think it would have been more than say, Turkey.
There are those who say it would have been above South Korea (though South Korea has no space programme yet). I doubt it because of Iran's proximity to Israel and its Muslim majority.
Yet, Iran would have been even farther had it not for the most stringent economic sanctions in history and foreign instigated wars for the entire period of its revolution. Or perhaps because of the sanctions Iran has attained real progress driven by her own sons and daughters.

http://www.youtube.com/watch?v=IPcA_yiXlGQ --- A day with Jamaran frigate and commander.

Iran's economy was bigger than South Korea's in 1979 (despite the fact that the Shah's regime enjoyed high oil prices only from 1973 on). Now, it is only a fraction of South Korea's. Despite receiving more money from oil revenues in the past 8 years alone than in the preceding century (going all the way back to the Qajar era!), the IRI is NOT even in the Top 100 among states in infant mortality and life expectancy (now, that's what I call "progress". IRI style)! How absolutely pathetic. And the IRI continued the war for several years after it had already been offered a truce -- those years that Khomeini wanted to continue the war until the IRI could march into Karbala were the bloodiest and most expensive years of the war. He was so reluctant to end the war in 1988 that he even compared it to drinking poison. So you can blame that animal Khomeini and his filthy followers for that.

SIR-do you allow us to believe that indeed IRANIAN engineers accomplished this mind boggling scientific project?AND IS IT NOT A FAKE ,another PR among the nasty gaffes of the regime?--AT YOUR MERCY!!.

These people have an agenda to spread their lies on behalf of the filthy Islamist rapist theocracy.

I think this is more accurate. http://youtu.be/0t75x7lxPaE

Any stats on the ship, as well as it's design history?

Without sanctions Iran would already be in next stages of space exploration and with a manned space flight completed..