Iran Clerics Criticize Ahmadinejad for His Claim of Chavez’s Resurrection 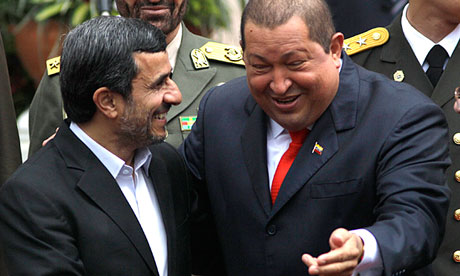 Some of Iran’s influential Shia clerics have criticized President Mahmoud Ahmadinejad’s tribute to the late president Hugo Chavez as “going too far.” Ahmadinejad had said on Wednesday that Chavez will be resurrected along with Jesus Christ.

“I say directly that he went too far with what he mentioned in his tribute,” said Ahmad Khatami, who is a Tehran Friday prayer leader and a close ally of Iran's supreme leader, Ayatollah Ali Khamenei. “The president is well aware that such a tribute will provoke reactions in our religious institutes … He could have sent a diplomatic message with no religious connotations.” (Fars News Agency/The Guardian’s Iran Blog, 7 March)
Ahmad Khatami added Ahmadinejad went “too far” with his claim that Chávez would “return on resurrection day.”

“He is alive, as long as nations are alive and struggle for consolidating independence, justice and kindness. I have no doubt that he will come back, and along with Christ the Savior, the heir to all saintly and perfect men, and will bring peace, justice and perfection for all,” Ahmadinejad had said in tribute to Chavez. (Mehr News Agency/The Guardian, 7 March)
Many Shia Muslims believe that Christ will accompany the Shia’s hidden Imam Mahdi, also called the Lord of Time, as one of Mahdi’s allies at his reappearance on the day of resurrection.

File photo: Mahmoud Ahmadinejad with Hugo Chávez in 2012. The Venezuelan president was one of the Iranian leader's closest allies. (Ariana Cubillos/AP/The Guardian)
Posted by Nader Uskowi at 8:00 AM