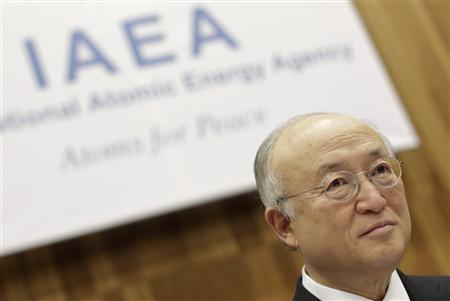 The IAEA Director-General Yukiya Amano today called on Iran to swiftly allow IAEA inspectors to visit Parchin military complex near Tehran. The military base is suspected to have housed a nuclear weapon research unit where related explosive tests were conducted.
Amano told IAEA’s 35-nation governing board on Monday that negotiations with Iran must “proceed with a sense of urgency,” Reuters reported today.
IAEA maintains that because Iran is not providing the necessary cooperation with inspectors, it “cannot conclude that all nuclear material in Iran is in peaceful activities”, said Amano.
“Providing access to the Parchin site would be a positive step which would help to demonstrate Iran's willingness to engage with the agency on the substance of our concerns," Amano added (Reuters, 4 March)
But its refusal to curb atomic activity which can have both civilian and military purposes and its lack of full openness with U.N. inspectors have drawn increasingly tough Western sanctions targeting its lifeblood oil exports.

Parchin is "suspected" based on a report by ISIS and David Albright. Albright was wrong twice before, where two visits to Parchin found nothing. And his latest report which was the basis of the "magnet story" was thoroughly debunked in the Bulletin of Atomic Scientists.

Nader, you really should apply this disclaimer to your reporting on newswires where the basis of claims has to do with ISIS and Albright. Otherwise you're just contributing to a false justification for potential war like what happened the last time when we started a terrible and costly war against Iraq based on false claims Iraq possessed WMDs. This is where journalistic integrity comes in.

What is this U.S./Israel-controlled U.N.'s lackey puppet looking for? What else, spying indeed!

Parchin is "suspected" by the IAEA. The agency does not publish its sources and if you know otherwise it has not publicly linked it suspicion of Parchin to any particular source. Notwithstanding its sources, Iran needs to come to terms with the agency by addressing this issue, especially in the current positive atmosphere.

Your suggestion of the lack of journalistic integrity regarding this post is unjustified and rude. Your own integrity requires that you offer an apology.

so now some idiot posts that David Albright controls the UN and the IAEA.

the poor fanboy is losing control of himself and trying to take us all into his increasingly disfunctional fantasies.