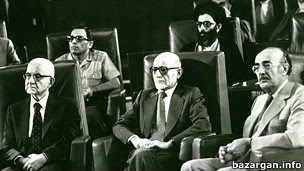 Ahmad Haj Sayyed Javadi, Iranian defense lawyer and politician, who served as the first interior minister after the 1979 revolution died today in Tehran at the age of 96. He was one of the leading members of the National Front and later the Liberation Movement of Mehdi Bazargan, the first post-revolution prime minister. He was elected to the parliament after the revolution.

During the shah’s regime, Haj Sayyed Javadi defended many political activists including the future supreme leader Ali Khamenei. After the revolution, he continued defending the opponents of the growing autocracy. For his outspoken defense of human rights he was imprisoned a number of times in the Islamic Republic, who was now led by Ayatollah Khamenei, his old client during shah’s dictatorship.

During the time he served as the interior minister he helped this blogger who was then the youngest editor-in-chief of a daily newspaper in the country to maintain the permission to publish the paper until the Bazargan government fell after the hostage taking incident.

We extend out deepest condolences on the passing of a champion of human rights to his family and to all freedom loving Iranians.

Rest in peace. A good decent Iranian of high integrity. Sayyed Ali Khamenei is sitting in the background photo and Gen. Javad Fakouri a great son of Iran and an exceptional military leader and an architect of the modern Artesh, particularly the total wartime reorganization of the IRIAF. His strategy of conserving the airforce and using the F-14A Persian Cats as AWACS and top cover for F4E and F5E was largely instrumental in Iranian victories and the survival of Iran and rapid reorganization following the jange tahmili. Sayyed Ali Khamenei is no slouch either and spent a considerable time on the Khuzestan and Ilam frontlines coordinating the nascent Basij and Sepah units with the Artesh. These men are truly great Iranians.

It is a shame that the once back seated great Iranian man in turban can no longer tolerate men in ties in front seats – no matter how decent and great they may be.

Another "intellectual" that help screw Iran by handing over the country to a bunch of savages.

This intellectual was opposed to that other regime that caused the revolution in Iran.

Why does the truth offend you so much? Just because the previous regime had some problems that could have been resolved through time doesn't mean that we had to commit suicide.This is why Iran is in such a dismal mess because of the stubborn attitude of certain "intellectuals" that refuse to accept their mistakes and continue with their repeated mistakes and on going hatreds.
The revolution was not caused by the other regime but by a bunch of anti modernists religious bigots and haters of everything that regime stood for, like progress and modernity.Those "intellectuals" were blind to the truths or they chose to join the destructive forces of the black and red.
The Black and the Red caused the so called "revolution" in Iran.The Black and the Red are two sides of the same coin.