‘No Flexibility Regarding Our Red Lines’ – Iranian Diplomat 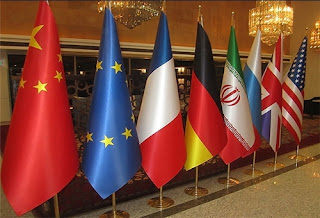 Iran has offered what it termed as “constructive solutions” to resolve disputes in nuclear talks, ISNA quoted an Iranian diplomat involved in the talks. But Western officials suggested they had heard nothing new from Tehran.

The biggest sticking points reportedly include the speed of sanctions relief, R&D on advanced centrifuges, and the current UN Security Council resolutions on arms embargo against Iran and the country’s ballistic missile program.

“I have not seen anything new from Iran (on the remaining differences,” a Western diplomat close to the talks today told Reuters. Another Western country echoed the remarks.

A senior U.S. official told reporters late on Tuesday that negotiations were approaching a moment of truth.

“I believe we will in the near-term either get the deal or find out we can’t,” the U.S. official said. (Reuters, 8 July)

Okay. So I've heard Hollande once say that the arms embargo on Iran should stay even after the nuclear deal. I'm assuming he's not alone in that.

Do you think this is fair?

I think it should be lifted after Iran certifiably has implemented all its commitments under a JCPOA. But I don't think this would kill a deal even if the embargo is not lifted. Iran has a strong defense industry of its own. The only thing that matters here, from the Iranian and Russian points of view, is the lifting of embargo would allow Iran to purchase billions of dollars of new generation fighter jets to replace its aging aircraft, some reaching beyond their operability. The Chinese might be interested in this too. You see the realpolitik is not about fairness.

I think it is not fair considering who buys Arms in the region but from West point of view. If in the first 5 years Iran obeys and buys the Fighters and equipment it needs and then disobeys it makes it even harder for them to attack and push back the regime ... considering that any Arms transfer takes 5 years to complete! That is not so extraordinary.

I don't think rescinding the arms embargo is doable for POTUS due to domestic politics.

However, from the Iranian position maintaining the embargo even upon a nuclear agreement strengthens Iran's argument that the nuclear issue included elements of expediency in countering Iran's foreign policy as well as attempting to diminish its national defense, with the intended audience for Iran's position at this stage of the nuclear negotiations being Russia and China, both of which are currently under levels of arms embargo.

Does anybody notice a pattern here? It reminds me of the time when we used to take turns on the carousell.