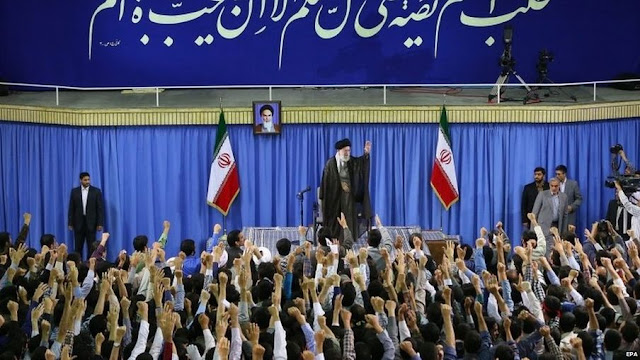 Iran’s Supreme Leader Ayatollah Ali Khamenei said today Iran’s stance toward the “arrogant” U.S. will not change despite the nuclear deal reached earlier this week. In a speech marking Eid Fetr, the end of the Islamic holy month of Ramadan, Khamanie said Iran would continue its policy in the region despite the deal.

“Whether the [nuclear] deal is approved or disapproved [in Majlis], we will never stop supporting our friends in the region and the people of Palestine, Yemen, Syria, Iraq, Bahrain and Lebanon,” Khamenei said.

“Even after this deal our policy toward the arrogant U.S. will not change,” Khamenei added. “We have repeatedly said we don’t negotiate with the U.S. on regional or international affairs; not even on bilateral issues.”

“There are some exceptions like the nuclear program that we negotiated with Americans to serve our interests… U.S. policies in the region are diametrically opposed with Iran’s policies.”

“The Americans say they stopped Iran from acquiring a nuclear weapon,” Khamenei said during his speech at the Mosala mosque in Tehran. “They know it’s not true. We had a fatwa [religious ruling] declaring nuclear weapons to be religiously forbidden under Islamic law.” (IRNA/BBC, 18 July)

The attendees repeatedly responded by chanting, "Death to America!" This was an angry speech and an angry celebration of the Eid that marked the end of Ramadan.

Well his "friends" in Yemen just lost control of Aden and he's doing nothing about it because his "enemies" have imposed a U.N approved blockade on the "friendly nation of Yemen" that stops him from shipping any more arms to the country.

After Yemen I'm inclined to say this: keep your mouth where your money is, Rahbar.

I didn't know they had nuclear weapons during mohammad's time.So nuclear weapons have been haram since then? What ever the case,this man has already mentioned what he will do with Iran's money by giving it all away to the Palestinians,Lebanese,Hezbollah and Houthis.In fact any freeloader that comes along will receive Iran's "Free cash",except for the poor Iranian people that are really in dire need of help. Just goes to show that only he alone controls the purse strings in that so called "republic".