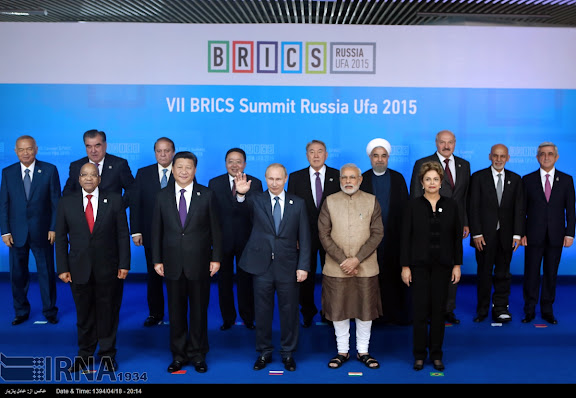 
Iran’s President Hassan Rouhani says he discussed further promotion of cooperation with leaders attending a joint summit of BRICS, the Shanghai Cooperation Organization (SCO) and the Eurasian Economic Union during his significant visit to Russia.

Speaking to reporters upon arrival at Mehrabad Airport in Tehran early on Friday, Rouhani described his visit to Russia as “highly significant” as member states of the SCO, BRICS and the Eurasian Economic Union comprise 50 percent of the global population and account for 30 percent of the world's gross income.

Rouhani arrived in Russia on Wednesday to attend a joint summit of BRICS (Brazil, Russia, India, China and South Africa), the SCO and Eurasia in the city of Ufa.

During his stay in Russia, the Iranian president held meetings with leaders attending the summits. He also delivered a speech, during which he said that Iran was ready for enhanced cooperation and interaction with emerging economic powers following the lifting of sanctions against the Islamic Republic.

COMMENTARY: Indian sources are reporting Modi and Rouhani spoke on the sidelines of the gathering with one of the main topics of discussion being India's development of Chabahar port in Sistan-Balochistan Province, which will give India sea-land access route to Afghanistan bypassing Pakistan. [source: The Hindu]

The New Development Bank, operated by the BRICS states, held its first board of directors meeting in Ufa. According to Wikipedia:


The New Development Bank (NDB), formerly referred to as the BRICS Development Bank, is a multilateral development bank operated by the BRICS states (Brazil, Russia, India, China and South Africa) as an alternative to the existing US-dominated World Bank and International Monetary Fund. The bank is set up to foster greater financial and development cooperation among the five emerging markets. Together, the four original BRIC countries comprise in 2014 more than 3 billion people or 41.4 percent of the world’s population, cover more than a quarter of the world’s land area over three continents, and account for more than 25 percent of global GDP. The bank will be headquartered in Shanghai, China. Unlike the World Bank, which assigns votes based on capital share, in the New Development Bank each participant country will be assigned one vote, and none of the countries will have veto power.

Coinciding with the summit, Iran and Russia signed a memorandum of understanding in Moscow to boost cooperation in the air transportation sector, said Mehdi Sanaei, the Iranian ambassador to Moscow.Based on the MOU, the two sides will launch air transportation routes between the two countries without limitation. [source: Trend News Agency]
Posted by Mark Pyruz at 3:30 AM