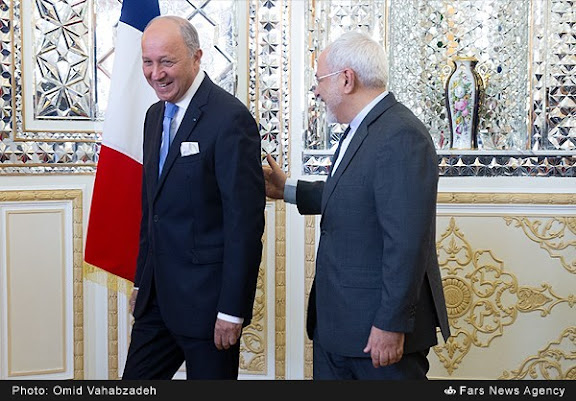 According to the New York Times, dated 29JUL15:


The French foreign minister arrived in Tehran on Wednesday, the latest in a string of visits by officials from European countries seeking closer economic and political ties with Iran after the nuclear agreement this month.

The visit by Mr. Fabius comes as French companies such as Airbus and the carmakers Peugeot Citroën and Renault have been seeking to renew ties with local producers that were cut because of the sanctions.

Meanwhile in Washington DC during congressional hearing on JCPOA, much of the talk continued to be focused on potential war with Iran, effectively surrendering considerable post-sanctions business opportunities to the Europeans and Asians. As Tim Maverick at the Wall Street Daily laments in a recent piece subtitled "No lunch for us":


Everyone knows that sanctions on Iran will be lifted eventually.

That’s why European and Asian companies are already in discussions with Iranian officials and businessmen to establish new relationships or to reignite old ones.

But American corporations are being held back by strict, decades-old restrictions on doing business with Iran. Foreign subsidiaries of U.S. companies may be allowed to invest in Iran. But, understandably, executives are wary of running afoul of the politicians.

So, while our top companies stand on the sidelines, our competitors will eat our lunch in Iran.

And it will be quite a tasty lunch, too. China is now Iran’s largest trading partner. And German exports to Iran are expected to quickly grow four-fold from 2.4 billion euros last year to 10 billion euros. Plus, Tehran already said that it will need in excess of $200 billion in investments for its oil and gas industry.

There’s a lot more than energy at play here, too. Iran is also an industrial powerhouse in waiting.

The country is the world’s biggest exporter of cement, and ranks in the world’s top 15 for both steel production and auto production. Iran is also recognized in the global medical community for its work in stem cell research and nanotechnology.

In other words, Iran isn’t a run-of-the-mill emerging market.

The country has little debt, unlike other emerging markets, and has a stock market with a market capitalization of about $110 billion. The Iranian market soared last year in anticipation of a deal, rising a record 130%!