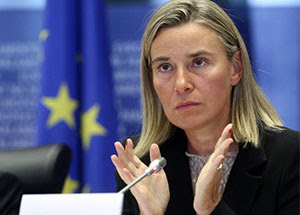 Rouhani and Zarif spoke during her visit on wider implications of the nuclear deal. Rouhani said the nuclear deal reached between Tehran and major world powers this month will “help fight terrorism and bloodshed in the Middle East.” Zarif said Tehran and the European Union could now discuss (other) questions “including energy cooperation… human rights, confronting terrorism, and regional issues.” (Reuters, 28 July)

“The agreement will be very important and influential for the future of relations in the region, Europe and the world,” Rouhani told Moghirini during their meeting. “It will help the fight against terrorism and stop war and bloodshed in the region.”

Zarif said at a joint news conference with Moghirini that they agreed to hold high-level EU-Iran talks on a wide range of issues including fighting terrorism.” (IRIB, 28 July)

Moghirini said regional and international cooperation with Iran “is very important to us.” On JCPOA, she said implementation of the agreement “depends on the political will, commitment and patience of all parties involved.”

If I was her I wouldn't wear that scarf in Iran.It would be very amusing to watch their faces.What are they going to do? Whip her? And by the way,I have seen some of these Islamic officials wives and daughters in London without any scarf and wearing attire that would qualify in Iran for one hundred lashes and six months in prison.Poor Iranian women are victims of a hypocritical system that is in power.

As a foreigner she probably would get away with it.

And you at 4:25 PM should be rather concerned about rights of Saudi arabia's women, because this 'website' is concerned more about wellbeing of the Saudi arabia, than Iran when it tries to support the Houthis.