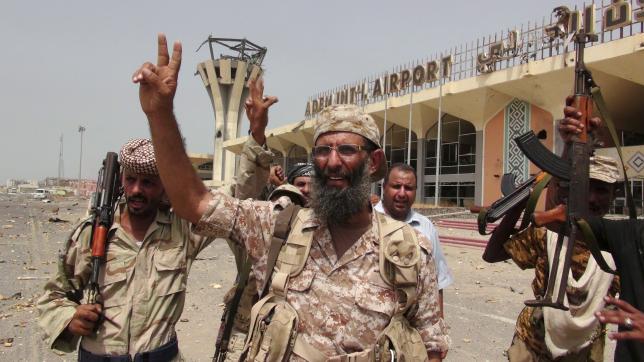 Yemeni exiled ministers today started returning to Aden after southern resiatance forces loyal to exiled president Hadi and backed by the Saudi-UAE-led coalition pushed Houthis and their allied forces out from most parts of Aden. The returnees included ministers of interior, health, transport, and the intelligence chief.

“Abd Rabuuh Mansur Hadi (the exiled president) delegated this group to return to Aden to work to prepare the security situation and ensure stability ahead of a revival of the institutions of state in Aden,” a Yemeni official said tonight. (Reuters, 16 July)

The statement seems to indicate the Hadi and his government could soon relocate to Aden. Such move would be a major development in the conflict that began when the Huthis stormed Sanaa last September. The ministers who returned today arrived by helicopter at a military base in Aden.

“Most parts of the city are secure,” added the Yemeni official.

General Fadhl al-Hasan, commander of pro-government forces loyal to Hadi in western Aden, told AFP that his troops have captured the coastal road overlooking the strategic Bab el-Mandeb Strait. He added, “the majority of the security leadership are in Aden and they are leading the battles… others will soon arrive.” (AFP/middleeast eye.net, 16 July)

Major neighborhoods of Crater and Mualla were among the parts captured by pro-Hadi forces today. On Tuesday, they captured the strategic Aden International Airport and much of the surrounding Khormaksar diplomatic district. Fighting in some parts of the city still continued, but major Houthi forces retreated from Aden.

“After the recapture of Khormaksar, there was a collapse in the ranks of the Huthis and their allies,” troops loyal to president Hadi told AFP.

They're claiming partial control of Aden International Airport and Khos Maksar, as well as halting GCC-suported advance towards Krater.

Above video depicts GCC-supplied Oshkosh M-ATV MRAPs and what appear to be knocked out Caiman vehicles.

Unusual to insert civil authorities into a contested war zone.

Reuters and AFP reports have been very accurate on Yemen. When Aden neighborhoods originally fell to the Huthis few months ago, we used their reporting as well. It is safe to say, however, that the city is still contested, as in the fighting in some neighborhood as reported in the post above, and the Huthis can mount a counter-offensive against the airport in future.

The return of ministers is probably a first step for Hadi's return to have the seat of their government transferred to Aden, which will put them in a much stronger position than being a government in exile.

Khaled Bahah, exiled Yemeni VP, said in a statement on his Facebook page Friday morning that "Aden has been liberated on this first day of Eid al-Fatr... We will work to restore life in Aden, to restore water and electricity."

The Arab coalition apparently plans to do to Yemen what the US backed African Union (AU) has done in Somalia.