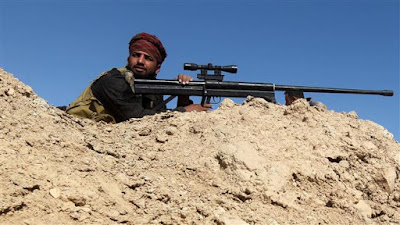 Iraqi Security Forces, including U.S.-trained Iraqi Army units, have made some advances in east and south of Ramadi. Backed by U.S.-led airstrikes, Iraqi forces took an ISIL command post at the University of Anbar, south of the city. The advance into the city, however, has apparently slowed down in the face of strong defense by the Islamic State fighters.

The situation is less favorable in Fallujah area. Iran-led Shia militia offensive to take the city has apparently stalled due to ISIL’s stiff resistance. Meanwhile, ISW reports that should the Iranian proxies be redeployed from Fallujah to Diyala because of deteriorating situation in that province that borders Iran, anti-ISIL Fallujah operation may lose further momentum. (ISW, Iraqi Situation Report; July 24-27, 2015).

Last August, Islamic State insurgents occupied Jalula, only 19 miles from the Iranian border, and were poised to move toward the border city of Khanaqin, when a Quds Force-led counter-offensive drove them out of the area. Iran does not want to see a resurgence of ISIL so close to its border and now it faces a dilemma. If it redeploys significant number of the Shia militia to Diyala, it risks losing the Battle of Fallujah. Keeping the militia in Anbar risks further deterioration of the situation in Diyala.

Obviously ISIL is attempting to induce an Iran-led coalition redeployment by use of VBEIDs, to relieve pressure elsewhere such as Fallujah. It would be surprising to see a major redeployment effected to basically garrison points at Diyala, in my opinion.

There are open-source photos of Iran-led coalition advanced elements that have taken up fortified, fighting positions at the edges of the city of Fallujah.

Surely we can't be far away from the point when an Iraqi government can agree to Regular Iranian Quds forces crossing the border and securing the Khanaqin/Diyala area, so as to relieve Iraqi forces of any such dilemma's?

In the first days of the war, the regular Iranian military, the Artesh, did deploy troops inside the Iraqi territory to stop ISIL advance into Iran's western provinces. The Quds Force-led Shia militias, supported by Iraqi and Kurdish security forces, then pushed ISIL fighters out of the region. The militia, with Badr Organization in the lead, under QF command, will have to keep Diyala secured. That's how the model has worked so far, with Quds Force leading the militia to secure the Shia/mixed ethnic regions, which include regions bordering Iran, and the Artesh securing the border. And I don't see any reasons or plans for a different model, like direct military intervention by IRGC/Artesh.

The Quds Force and the militia decided this year to extend the defensive parameter for Baghdad, Shia south Iraq and the Iranian border into predominantly Sunni areas. They took Tikrit, and now are attempting to enter Fallujah. This is the part of their plan that could be halted or scaled back, with the militia instead concentrating on areas closer to Baghdad, Shia south and the Iranian border.