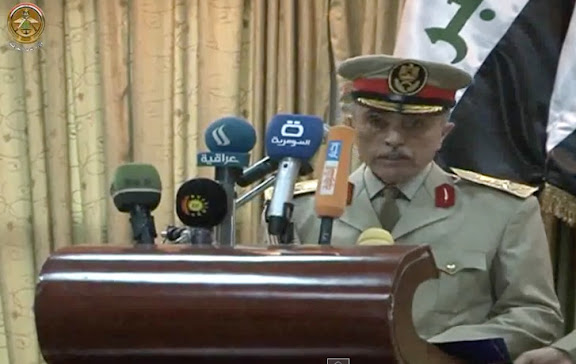 According to Agence France-Presse, dated 29JUN15:


Iraqi premier Haider al-Abadi has "retired" the army's chief of staff, the most senior officer removed since jihadists overran large parts of the country last year, his spokesman said Monday.

Abadi has sacked dozens of army and police officers in an effort to restructure and improve security forces that performed disastrously when the Islamic State jihadist group launched an offensive last June, overrunning major areas north and west of Baghdad.

Zebari repeatedly said before the [U.S. military] withdrawal that it would be better if American forces stayed, as it would take years for the Iraqi army to be fully ready.

"If I were asked about the withdrawal, I would say to politicians: the US army must stay until the Iraqi army is fully ready in 2020," Zebari told AFP in 2010.

While Zebari was chief of staff, military responsibility was devolved elsewhere post 2011, with former prime minister Nuri al-Maliki centralizing control of the armed forces in his office and bypassing the defense ministry.

Commentary: General Zebari, an ethnic Kurd, was seen two weeks ago among Abadi's delegation of Iraqis conferring with Iranian leadership in Tehran. The Iraqi chief of staff was outfitted in civvies.

Zebari claims he had applied for resignation back in October 2014.

It's reported Kurdish President Masoud Barzani has nominated Iraqi Air Force General Anwar Hama Amin to serve as the next chief of staff.

Zebari's inconvenient at the-time remarks over the termination of a U.S. military presence in Iraq were reminiscent of U.S. Army GEN Shinseki's prior, pre-OIF response to Congress, where Shinseki reckoned a force numbering in the hundreds of thousands required for a successful U.S. military occupation of the country.

Is this relevant to Iran. What has Iraqi army achieved so far besides being sheer incompetent!

The issue of Iraqi army's competence, or lack of, is indeed very relevant to Iran, which is conducting the largest counterinsurgency operations in Iraq.

The Iraqi army retired a long time ago.

Absolutely correct. Though it's important to Point out that the competent ones retired a long time ago. I should know : )